Today, May 21st would have been my father’s 90th birthday. Eugene Ehrlich was known by many for his authorship of numerous books about writing and language—notably The Oxford American Dictionary and a couple of Latin phrase books, as well as books of quotations, thesauruses, study guides and style manuals. He also had a regular gig years ago on NPR’s “All Things Considered.” I am sharing this anniversary because as I look at our website, I realize the extent to which his concern for the integrity of words and language has influenced our content. I know that it’s important to me as I gather material. Dr. Paul Ehrlich and Dr. Larry Chiaramonte are ideal collaborators because both are sticklers for the precision of words in the diagnosis and treatment of allergic disease, and are willing to hold word slobs to account. The best example is their joint dissection of Senator Rand Paul’s gymnastics with the term “air pollution.” Another is Paul’s piece on the different meanings different specialties attach to a word like “anaphylaxis”, and a third in Larry’s taking to task journalists for their uncritical acceptance of tennis player Novak Djokovic’s claim of a gluten allergy.

Paul’s and my curmudgeon tendencies had a common source. I learned only a few years ago that as children Paul and his siblings would rehearse their grammar when they came to visit us because my father–his uncle–was such a pain in the neck about it. But Larry is just as strict when it comes to allergic medicine. As we discuss in our book, he was one of the first allergists to study food allergies and pseudo food allergies—the self-reported kind that provide such fertile ground for misplaced anxiety and quackery—conflation of which does such a disservice to those who have the real thing.

Among the many pleasures of collaborating on Asthma Allergies Children: a parent’s guide was having concepts explained in terms of the classical roots of medical terminology. For example, the transformation wrought by allergies becomes more evocative when you consider that the word allergy comes from the Greek allos, which means “other, different, or strange”.

“When you look at these words in the context of modern English, you can appreciate the many characteristics ascribed to these symptoms of inflammation: Rubor—Think of ruby red, the color of blood. Tumor—What does tumor mean in old English? It’s a swelling on the body, either cancerous or not. Dolor—Sadness caused by pain. Calor—Calories are units of energy, and energy gives off what? Heat.”

Maybe I was spoiled because of the example of my uncle Dr. Leonard Ehrlich (Paul’s father), who was extremely plainspoken, as well as Paul himself, and my sister Anne, a radiologist, but one of the revelations of this whole project has been the extent to which medical writing reflects the equivocal nature of medical science. Reading, however cursorily, as many journal articles as I do, I sometimes want to ask the researchers “what do you really think?” They are often couched in the kind of locutions that Dad always warned against. But that may be the best we can hope for because doctors don’t always know. They know what they don’t know.  Even then, they may only know what they don’t know 60% of the time, and it will be years before any of it is reimbursable by an insurance company.

This insight into the sausage-making aspects of medicine has been both disconcerting to me as a patient (or as some might put it, a “consumer of health care”) and uplifting. It has been disconcerting because I can see how uncertainties and outright mistakes find their way into practice, and end up at very least costing a lot of money. It is uplifting when you find a doctor who can draw on thousands of years of language, science, and custom to create a convincing course of treatment based on the evidence, and can adjust as circumstances change. After all, as my father might have put it, mus non uni fidit antro.* Thanks, Dad.

*“A wise person always has a backup plan…literally ‘a mouse does not put its trust in one hole.’”  Veni, Vidi, Vici 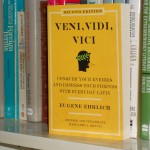 Conquer Your Enemies and Impress Your Friends with Everyday Latin, by Eugene Ehrlich, revised and updated by Margaret A. Brucia.

Kelly Barta, who has previously appeared on this website, is a survivor of topical steroid … END_OF_DOCUMENT_TOKEN_TO_BE_REPLACED

By Paul Ehrlich, MD The title above is from an excellent article in The Atlantic by … END_OF_DOCUMENT_TOKEN_TO_BE_REPLACED

By Dr. Paul Ehrlich and Henry Ehrlich We were saddened to read that our co-author … END_OF_DOCUMENT_TOKEN_TO_BE_REPLACED