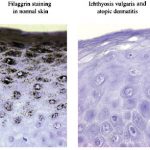 Atopic dermatitis, or eczema, is usually a tipoff that an infant stands a chance of developing allergies and asthma, a progression known as the atopic march. The skin has gotten a great deal of attention in the last few years as an induction point for food allergies—particularly peanut—but what role it plays in the broad spectrum of allergic diseases is still being studied.

Patients with atopic dermatitis are often born with a genetic mutation that leaves them deficient in filaggrin, which leaves their skin unable to perform a primary function, namely protecting against bacteria, viruses, and of course allergens.

What happens next? A recent paper published in the Journal of Allergy and Clinical Immunology sheds further light on the process. Mice with filaggrin deficiency developed spontaneous eczema as their innate immune systems began to react with antigens as if they were a threat, and the skin responds as if it were any ordinary cold virus. However, in many cases, the adaptive immune system is also triggered, and this is what progresses to asthma. Could that process be stopped at the skin, thus halting the atopic march? I reached out to our go-to dermatologist, Dr. Peter Lio of Chicago, who has discussed protecting infant skin for us here, among other topics he has written about:

This is a fairly complex and ambitious study that is able to elegantly demonstrate several different phenomena in a mouse model. Most importantly, perhaps, they are able to show a model of the “allergic march”. This is the idea that eczema can progress to other types of allergies.

In this study, mice that were specifically engineered to be deficient in filaggrin protein (an important component of the skin barrier and found to be deficient in many humans with atopic dermatitis) develop allergies, have what looks like a mouse-version of atopic dermatitis, and then go on to develop inflammation in the lungs similar to asthma over time; in sum, the filaggrin deficiency alone leads to what looks very much like the atopic march!

Interestingly, they were also able to show that the same filaggrin deficiency can have slightly different manifestations depending on some of the immunological aspects of the mice, and that this correlates nicely with the fact that there is a range of presentation in humans as well, depending likely on other background genes.

The paper then goes on to show–using very elegant immunology–that the atopic dermatitis seems to be mediated by innate immunity (the older, simpler, and non-specific aspect of the immune system), but that the adaptive immune system (the aspect that is highly-specific and “learns” from prior exposures) is necessary for the asthma-like lung changes.

This is very exciting in that it confirms and supports the idea that the skin barrier problem comes first with the atopic dermatitis. Then over time, other allergic symptoms develop, quite possibly due to the skin breakdown and inflammation. From a clinical standpoint, this seems to support the more recent notion that restoring the skin barrier with moisturizers could actually prevent the development of atopic dermatitis and thus halt the allergic march before it even begins. While more work needs to be done here, particularly in actual humans who have far more complex immune systems than mice, this paper beautifully outlines a mechanism for understanding this disease and its progression.

You've heard from a patient. Now you will hear from a doctor. Topical Steroid Withdrawal, … END_OF_DOCUMENT_TOKEN_TO_BE_REPLACED

By Paul Ehrlich, MD The title above is from an excellent article in The Atlantic by … END_OF_DOCUMENT_TOKEN_TO_BE_REPLACED

By Dr. Paul Ehrlich and Henry Ehrlich We were saddened to read that our co-author … END_OF_DOCUMENT_TOKEN_TO_BE_REPLACED