As I write this white ash is visible in the polluted San Francisco Bay Area air, wafting down from a smoky orange sky and into our lungs, a dangerous byproduct of wildfires burning in California, Oregon and Washington. Already this is the worst year for wildfires in California history, and the official season has barely begun. More than 3.4 million acres across the West have burned.

It’s not lost on me that this environmental disaster, a fatally perfect firestorm resulting from years of poor fire management and likely heightened by above-normal temperatures, emphasizes the need for the independent unbiased scientific research of my environmental nonprofit, Berkeley Earth. It is likely that global temperature increases were a contributing factor to these fires, but how much they contributed is largely unknown.

Web traffic to our global real-time air pollution map, which launched in 2014, has been spiking as the media and the public struggle to make sense of the particulate-sodden air that’s coating our cars with ash and seeping into our homes. My heart goes out to everyone who is affected.

Depending which way the winds are blowing — or not blowing — when the fires are at their worst it can sometimes look and smell like your neighborhood is on fire, with a haze of white smoke sitting low to the ground even though the actual flames are miles away. Air pollution can reduce visibility to distances of less than a mile and often completely obscures views of local landmarks and mountain peaks for days at a time.

Berkeley Earth offers not just real-time data, but also historical data for comparison. Do you want to know how air pollution in your city in August 2020 compares to the fire season in 2019, 2018, or 2017? You can easily look this up on our historical graphs. You can also see spikes in most years on New Year’s Eve and the Fourth of July, as fireworks temporarily cause horrific pollution, which then thankfully dissipates after a few hours. We in California have started expecting these increases in pollution levels during fire season, but others worldwide must fight dangerously high levels of pollution daily.

Why does this matter? Even just slightly unhealthy air can be difficult for those with breathing problems. To help protect my asthmatic 6-year-old we have four air filters operating 24/7 and just bought a fifth one.

At least my family is well-versed in this challenge. I even blogged about it here during fire season of 2017, when our advice was the same as it is today: Stay indoors, use indoor air filters that filter particulate matter (especially PM 2.5), limit outside activities, and wear a proper face mask if you do go out.

Yet it hasn’t been that long that we’ve even measured PM 2.5, now considered the most dangerous form of air pollution. If you’ve never heard of it, you’re not alone. PM 2.5 is small particulate matter, measuring 2.5 microns in diameter or smaller. These particles are small enough to work their way deep into the lungs and into the bloodstream, where they can lead to health issues such as a heart attack, stroke, lung cancer and asthma. The main impact seems to be an increased risk of cardiovascular disease, which kills more people worldwide each year than does AIDS, malaria, diabetes or tuberculosis.

Some less serious but more immediate physical side effects of living near a burning wildfire include painfully irritated eyes, chest congestion and a slight cough or scratchy throat. For those who exercise outdoors, even a 30-minute workout on a day where the PM2.5 is at “unhealthy” levels and higher can trigger respiratory problems. Medical experts usually say people without health problems can get away with an occasional workout in smoky air but that sensitive populations should avoid it.

One way of understanding PM2.5 air pollution is to compare it to smoking a cigarette, as my Berkeley Earth co-founder Richard Muller and I did a few years ago. You divide the PM level (not to be confused with the Air Quality Index, or AQI) by 22 to get the approximate number of cigarettes equivalence.

For the United States and Europe on average, air pollution is equivalent in detrimental health effects to smoking 0.4 to 1.6 cigarettes per day. During this fire season it has gotten as bad as 5 cigarettes/day. 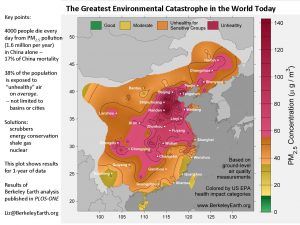 Yet we have seen far worse numbers in China and India, where on bad days the health effects of air pollution are comparable to the harm done smoking several packs per day (up to 60 cigarettes). Ambient air pollution is estimated to cause 4.2 million deaths annually, which makes it arguably the greatest environmental catastrophe in the world today.

As a nonprofit organization, Berkeley Earth relies on donations to support independent air pollution and climate change research. We hope you find our data useful and are inspired to make a contribution, even a small one helps, so we can continue educating the world about these serious health issues.

Elizabeth Muller is Co-Founder and CEO of Deep Isolation, a company that’s disrupting the nuclear waste industry by offering an innovative, safe and permanent solution for nuclear waste disposal.She is also Co-Founder and Executive Director of Berkeley Earth, a nonprofit organization using modern statistical techniques to offer independent unbiased analyses of environmental concerns such as global warming and air pollution. Muller was recently named a Clean Energy Rising Star by Business Insider, which earlier this year listed Deep Isolation as one of its Top 30 clean tech industry startups based on data compiled by Goldman Sachs. Previously, she was Director at Gov3 (now CS Transform) and Executive Director of the Gov3 Foundation. From 2000 to 2005 she was a policy advisor at the Organization for Economic Cooperation and Development (OECD). Muller has advised governments in more than 30 countries, leading projects on improving government effectiveness, organizational change, citizen centricity, the digital divide, and developing national strategies for e-Government and ICT.

This was the first of several chats I had with Dr. Peter K. Smith, whose "False Alarm … END_OF_DOCUMENT_TOKEN_TO_BE_REPLACED

This was the first of several chats I had with Dr. Peter K. Smith, whose "False Alarm … END_OF_DOCUMENT_TOKEN_TO_BE_REPLACED