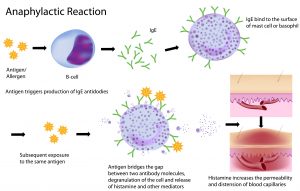 My local newspaper had an article the other day about a study published in July’s Annals of Allergy, Asthma and Immunology that pointed to a systemic weakness in the war on anaphylaxis. Namely, the reluctance of caregivers to actually use epinephrine on the children under their supervision. The Times writes, “[W]hen children experience serious allergy attacks, known as anaphylaxis, parents, teachers, emergency responders and other caregivers often fail to administer epinephrine — even to children who had previously experienced anaphylaxis and been prescribed an epinephrine autoinjector.” They continue, “The research suggests a need for more education, showing caregivers ‘how to use the autoinjectors and walking them through what signs to look for,’ said Melissa Robinson, an allergist and lead author of the study.”

The research, conducted at Nationwide Children’s in Columbus, Ohio, found that just 36 percent of those experiencing anaphylaxis received epinephrine before arriving at the emergency department. The average age of patients was 7 years old.

Given that epinephrine is pretty much universally recognized as the first and best line of defense against anaphylaxis these figures are pretty scary. It shows, among other things, that we are still lagging in educating our patients and their caregivers. Too often patients and parents leave their allergists’ offices with prescriptions for autoinjectors but with no instruction on how to use them, no opportunity to ask questions, and otherwise prepare themselves for a possible high-stress emergency intervention. I always give my new patients a chance to try out an expired injector on an orange, but that is not the case with all my colleagues. It’s frightening to use the thing in a real event, but, to cite General George Patton, “training produces a vicarious kind of courage.”

Re-Enter Auvi-Q
The Auvi-Q was a welcome addition to the market, which was why we all grieved when it was withdrawn, and why we are so pleased to have it back. For those who aren’t familiar with it, Auvi-Q gives its own spoken instructions and has a training unit that is authentic except for the lack of a needle. Vicarious courage spoken here. My patients love it so much I even went over to NYU Hospital where I am on staff and made sure the allergists were familiar with this cool item and how the company that makes it has gone out of its way to make it affordable.

The challenge of getting parents, teachers, babysitters, and grandparents to use epinephrine remains. Like many others, I am wary of the move to generics, pre-filled syringes, and other alternatives spawned by Mylan’s fancy financial footwork. These things would be perfectly satisfactory in the right hands, as is EpiPen itself. However, to place a multiplicity of devices from families with a variety of insurance plans in the hands of school nurses or teachers and expect them to act with the requisite sense of calm and urgency is to court disaster. As our contributor Dr. Julie Brown has written, even a warhorse like EpiPen is prone to misuse and misadventure. Add to that the stress of actually having to find the right muscle in a kicking thigh with a syringe and depressing the plunger yourself and the chance of something going wrong is multiplied. Medical and nursing students overcome their qualms right away, but a teacher or a grandparent won’t have that kind of immersion.

An Auvi-Q for Younger Kids
A few days before the Times article was published, Kaleo announced it had received priority review status for a new version for infants and small children weighing 16.5 to 33 pounds. The new 0.1 mg dose epinephrine auto-injector has a shorter needle length and lower dose than existing 0.15 mg and 0.3 mg epinephrine auto-injectors.

I have mixed feelings about this. On one hand I commend the spirit of innovation. And taking pressure off the caregiver in an emergency is always a good idea. I can take better pictures with my cellphone than I ever did with a camera. Giving epinephrine should be that easy.

On the other, I can’t help thinking about the dimensions of the problem. This product is directed at ages when the parent has the most control over the child’s exposure to her allergens. In our book we refer to the “worry years.” We wrote, “In the first year of a child’s life, a parent has almost total control over the child. Between one and two, the child starts to ‘cruise,’ i.e., get around the house, so anything within range of the child’s hand is also within range of her mouth. Since there is no reasoning with a child that age, the responsibility for making sure that nothing allergenic is within reach lies with the parents.” Fortunately, by twenty-four months, the age of reason, which coincides with the terrible twos, they are usually large enough to handle the 0.15 dose. While I have seen my share of emergencies with children in that 16.5-33lbs. zone, because the parents exert so much control they are very rare, and they have always been handled with the current tools.

You've heard from a patient. Now you will hear from a doctor. Topical Steroid Withdrawal, … END_OF_DOCUMENT_TOKEN_TO_BE_REPLACED

By Paul Ehrlich, MD The title above is from an excellent article in The Atlantic by … END_OF_DOCUMENT_TOKEN_TO_BE_REPLACED

By Dr. Paul Ehrlich and Henry Ehrlich We were saddened to read that our co-author … END_OF_DOCUMENT_TOKEN_TO_BE_REPLACED