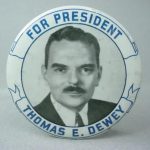 Do you remember President Thomas E. Dewey? Neither do I. Of course, I was only four years old when he was “elected” but as every high school history student knows, the newspaper headlines proclaiming Dewey’s victory in 1948 were wrong. I think about this every time a study comes out about the extent of food allergies.

This past fall, an article published in Pediatrics resulted in headlines like this one on WebMD “African-American Kids May Have More Food Allergies”. This was at odds with my observations. The WebMD report said, “The study found that African-Americans have a threefold higher risk for food allergies than the general population and that African-American male children had the highest food allergy rates in the U.S., with a fourfold higher risk.” Funny, but after spending at least one day a week for several years in inner-city schools dealing with severely asthmatic children, I saw NO co-morbidity with peanut allergies, which led the Pediatrics list. It may be, as Dr. Susan Prescott suggests in The Allergy Epidemic, that food allergies will follow in the next generation, but that’s not what the study indicates. The data in Pediatrics, based on 1100 children in Boston, only show food-specific sensitization as measured by the presence of IgE antibodies in the blood.

Now the Journal of Allergy is reporting that food allergies may be more prevalent in higher educated households, which resulted in this very misleading headline in the Canadian publication the National Post: “The Downside of a Good Education: Food Allergies”.

What does all this have to do with President Thomas E. Dewey? In 1948, when Dewey ran against Harry S. Truman, polling was not the refined art that it is today. The poll that predicted Dewey’s victory was conducted by telephone by a publication called Intellectual Digest. In 1948, however, the telephone was not the ubiquitous instrument we know now, but a relative luxury. The affluent households that had one were skewed to Republicans and they expressed a preference for Dewey. Hence, Dewey “won.”

I have a feeling that both these studies suffer from some methodological weaknesses akin to the 1948 election. Measuring serum IgE levels doesn’t correlate with the presentation of allergic symptoms. In the Journal of Allergy paper, Dr. Ben-Shoshan et al admit: “the actual prevalence may not be higher in the more educated, but may merely appear increased because of greater likelihood of seeking a diagnosis.”

The incidence of food allergies is undoubtedly rising. I would like to see the Boston study repeated with component tests, which would likely produce very different results; think landline vs. iPhone. As for the Canadian paper, I can only say, study hard kids—maybe one of you will grow up and find a cure.

This was the first of several chats I had with Dr. Peter K. Smith, whose "False Alarm … END_OF_DOCUMENT_TOKEN_TO_BE_REPLACED

This was the first of several chats I had with Dr. Peter K. Smith, whose "False Alarm … END_OF_DOCUMENT_TOKEN_TO_BE_REPLACED