As we say in our book, a good history solves the mystery. Those who have read it are familiar with our unbounded admiration for the work of Sir Arthur Conan Doyle, creator of Sherlock Holmes, who was “a Dr. before he was a Sir.” Holmes’ keen eye for evidence was inspired by Conan Doyle’s med school instructor, Dr. Joseph Bell. Most allergists are firmly in that dogged tradition of inquiry to find evidence that will lead to better outcomes. Allergies are tricky. Associating cause and effect is often difficult. I take a great deal of effort to track the triggers to an allergic reaction because it is right for the patient; you stand a chance of avoiding repetition. You might say, those who don’t know history are doomed to repeat it. It also makes the practice of this specialty interesting, year in and year out.

Thus it was when a new patient came to my office last fall, complaining of a “strange body-wide rash.” With dermatitis, patients may choose to go to a general practitioner or a dermatologist, who may give them prednisone, which will take care of the symptoms. But allergists generally do not just treat the symptoms. We try to solve the mystery. People can get “contact dermatitis” from things as disparate as nickel in jewelry to make-up. Other rashes can come from things like food. With something as widespread as this rash, I thought it unlikely the cause was jewelry or make up, which result in local reactions and can be treated with topical medications. 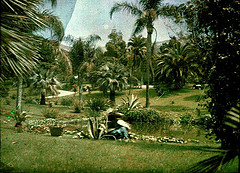 We went back day-by-day to the beginning of the outbreak trying to figure out where she had been, what she had eaten, and what she had touched. It turns out that she is a volunteer at the world famous Brooklyn Botanic Garden, and she had attended a dinner there at which each guest was given a plant. She had, in fact, scratched herself on it. I gave her prednisone, which did its work, and on a follow-up visit she brought along the offending plant. Unsurprisingly, she left it with me. The other day I received the following reply to an inquiry she had made to the president of the Botanic Garden, who passed it along to one of the scientists:

From Dr. Kerry Barringer, curator of the herbarium at Brooklyn Botanic Garden:

It turns out that the sap in the leaves of many Agave species can cause a nasty dermatitis in some people. I can’t find any specific reports for Agave attenuata, but many other species are known sources.

The culprit seems to be calcium oxalate crystals in the sap. These needle-like crystals can pierce the skin and act as irritants. The rash can blister and usually lasts for 1-2 weeks. Some people report recurrent itching for up to a year after exposure. Calcium oxalate crystals occur in many monocots and are known to cause dermatitis in people handling plants as diverse as Philodendrons and tulip bulbs.

There are also waxes, oils, and soap-like compounds that have also been tagged as potential allergens. Sometimes these can occur on the leaf surface and cause a reaction if someone gets scratched or poked by a spine.

With most plant allergies, sensitivity varies greatly among individuals. As you know, Agave attenuata is widely grown and is not generally considered to be problem, but everyone reacts differently.

You've heard from a patient. Now you will hear from a doctor. Topical Steroid Withdrawal, … END_OF_DOCUMENT_TOKEN_TO_BE_REPLACED

By Paul Ehrlich, MD The title above is from an excellent article in The Atlantic by … END_OF_DOCUMENT_TOKEN_TO_BE_REPLACED

By Dr. Paul Ehrlich and Henry Ehrlich We were saddened to read that our co-author … END_OF_DOCUMENT_TOKEN_TO_BE_REPLACED