The following is a review I wrote for Dr. Susan Prescott’s book, The Allergy Epidemic. A decade later, I invited her to speak to our conference on July 25. To my delight, she not only remembered the review but enthusiastically accepted the invitation. Her ideas about the connection between the environment and human health resonate much more powerfully today. –Henry Ehrlich

After almost two years of editing this website, the most persistent question I hear or read is “Why?” Why have allergies grown exponentially? Why can’t my son breathe? Why can’t my daughter eat what everyone else can? As I have also found out, it isn’t just lay people who wonder. I sat with two old friends this past summer, both distinguished doctors on the faculty of a premier medical school, and they asked me what I thought. If they have to ask me, where does that leave the rest of us? No wonder so many parents use the Internet like The Da Vinci Code, thinking they are going to find the answer, jumping from one clue to another: genetically modified food, or processed food, or imported food, or vaccines, or their spouse’s genes, or their own. It’s what Mom ate while she was pregnant, or didn’t eat, or raising a child in a city or suburb instead of on a farm. Just about every manifestation of modern life is implicated. Things like hygiene and the very drugs that revolutionized the treatment of infectious diseases are now in the blowback phase, giving rise to diseases of the immune system. As we wrote in our own book, “it is legitimate to ask, if progress is causing all that trouble, if our environment is too antiseptic, is worth it? Or should we just move into mud huts with no indoor toilets?” 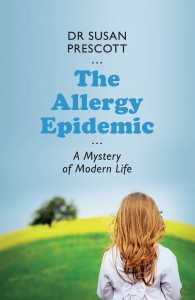 Into this muddled discussion, we should all welcome The Allergy Epidemic by pediatric allergist and immunologist Dr. Susan Prescott of the Princess Margaret Hospital and the University of Western Australia in Perth. She writes, “one of the greatest challenges of modern medicine is to learn how we can live in the new world we have created.” It may surprise many to learn that Australia is among the top couple of countries in the world in the incidence of allergic disease. As the author points out, the financial costs of allergies in her country are about double the costs of arthritis. It doesn’t surprise me—Australia has passed Canada in our traffic rankings and Perth provides more visits to this website than any city in the world other than New York. I would be pleased to know that some of those hits come from Prescott and her students.

According to Prescott, we are all predisposed genetically to allergies on some level because the allergic response is a useful immune response that has been misdirected. What makes the difference is certain environmental exposures. “As allergic reactions are directed to the external environment, it makes sense that the areas of the body affected are those that are in most immediate contact with the environment: the skin, the airways and the gut.” Thus the allergic march—eczema, nasal allergies, asthma and food allergies.

Dr. Prescott wears many hats: she is a compassionate practitioner and draws on her patients for vivid case material; each case is followed by a thorough bulleted summary of the salient points. She has a fascinating personal story that helps explain her infatuation with the immune system. She is a teacher, and much of this book could serve as a practice guide for doctors who don’t really know much about allergy and its treatment, or even for specialists who are trying to brush up on current and prospective treatments. She is a scientist who not only produces original work, but also digests current science in both long form for her colleagues and the simple version for non-doctors. You don’t have to know a cytokine from a leukotriene to follow the story.

Her comfort with the science allows the author to do the greatest service for readers. Research is galloping ahead on many fronts, and she pulls them together—the hygiene hypothesis, the very early presentation of allergic symptoms, the importance of microbes, which are thought to outnumber cells in our bodies, and the lifestyle changes such as indoor activity that reduces sunlight exposure and thus our levels of Vitamin D. But to me the most compelling discussion lies in her introduction of the “new science” of epigenetics, which concerns not the coding in our DNA per se. Instead, it’s in the sequence and timing of gene “expression” i.e. which parts of the double helix do what, and when. A liver cell and a kidney cell have the same DNA, but one becomes one thing and one the other because of their expression. Why can identical twins have the same genes, and yet one is allergic and the other is not? “As in so many other situations, we discover the true importance of something only when it is missing…While specific gene defects have revealed much about the immune system, it has also become clear that asthma and allergic diseases are not due to specific immune defects, but due to complex interactions between our genes and our environment.”

As Prescott explains, environmental triggers as various as pollution, pollens, and viruses, or lack of exposure to certain microbes through unwarranted use of antibiotics and caesarian birth can alter the way genes are switched on and off. This can result not only in allergies and asthma but autoimmune disease and other chronic illnesses that have increased in tandem with allergies. Moreover, these changes in gene expression can be passed on to subsequent generations. Seventy percent of atopic children have no family history of allergies, but the effects do cascade; grandparents with pollen allergies have asthmatic children and food allergic grandchildren. If there’s one chapter of this book that should be read by everyone who wants to begin to understand not just allergies but the larger process of adaptation and maladaptation to a changing world, it’s chapter six.

Complicated as all this is, Dr. Prescott’s message is finally one of long-term hope, and a call to action. Mounting her “soapbox,” she proclaims, “In theory, the very fact that modern diseases have increased, means they must be modifiable. The same factors that are promoting the disease, could also be actively harnessed to reduce the risk of disease.”

The Allergy Epidemic
A Mystery of Modern Life
Published by: UWA Publishing

To hear an interview with Dr. Prescott, click here.

This was the first of several chats I had with Dr. Peter K. Smith, whose "False Alarm … END_OF_DOCUMENT_TOKEN_TO_BE_REPLACED

This was the first of several chats I had with Dr. Peter K. Smith, whose "False Alarm … END_OF_DOCUMENT_TOKEN_TO_BE_REPLACED