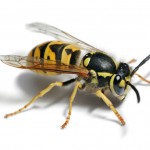 Allergic reactions to insect stings constitute a major medical problem, resulting in about 50 recognized fatalities annually in the United States and are likely responsible for other unexplained sudden deaths. People at risk often are very anxious about future stings and modify their daily living patterns and lifestyles. Recent advances have provided very effective treatment. For many affected people, this is a self-limited disease; for others, treatment results in a permanent cure.

The stinging insects may be broadly divided into 2 families: the vespids, which include the yellow jacket, hornet, and wasp; and the apids, which include the honeybee and bumblebee. People may be allergic to one or all of the stinging insects. The identification of the culprit insect responsible for these reactions is very important in terms of specific advice and specific venom immunotherapy treatment discussed later.

The honeybee and bumblebee are quite docile and tend to sting only when provoked. The honeybee usually loses its stinging mechanism in the sting process, thereby inflicting self-evisceration and death. The presence of the stinging apparatus in the skin after a sting usually, but not always, indicates the honeybee is the offending insect.

The yellow jacket is the most common cause of allergic insect sting reactions. These insects nest in the ground and are easily disturbed in the course of activities, such as lawn mowing and gardening. They are also attracted to food and commonly found around garbage and picnic areas. They are present in increasing numbers in late summer and fall months of the year. Hornets, which are closely related to the yellow jacket, nest in shrubs and are easily provoked by activities, such as hedge clipping. Wasps usually build honeycomb nests under eaves and rafters and are relatively few in number in such nests. In some parts of the country, such as Texas, they are the most common cause for insect stings.

In contrast to stinging insects, biting insects such as mosquitoes, rarely cause serious allergic reactions. These insects deposit salivary gland secretions, which have no relationship to venom deposited by stinging insects. Serious allergic reactions have occurred from the bites of some insects, such as the deerfly, blackfly, and bedbug. There are isolated reports that suggest, on rare occasions, mosquito bites can cause serious reactions. It is much more common, however, for insect bites to cause large local reactions.

REACTIONS TO INSECT STINGS
The usual reaction from an insect sting is mild redness and swelling at the sting site. This reaction is transient and disappears within several hours. Little treatment is usually needed, other than analgesics and cold compresses. Insect stings, in contrast to insect bites, always cause pain at the sting site.

LARGE LOCAL REACTIONS
Extensive swelling and erythema extending from the sting site, over a large area, is a fairly common reaction. The swelling usually reaches a maximum in 1 to 2 days and may last as long as 10 days. On occasion, fatigue, nausea, and malaise may accompany this large local reaction. Aspirin and antihistamines are usually adequate treatment. When severe or disabling, steroids, such as prednisone, may be very helpful. These large local reactions have been confused with infection and cellulitis. Insect sting sites are rarely infected and antibiotic therapy rarely indicated.

The natural history of large local reactions is that they are likely to recur after re-stings and the risk for more severe reactions is very low.

ANAPHYLAXIS–SEVERE REACTIONS
The most serious reaction that follows an insect sting is anaphylaxis. This occurs in anywhere from 0.5% to 3% of the population. Allergic reactions can occur at any age; most have occurred in individuals younger than age 20 and with a male to female ratio of 2:1. These factors may reflect exposure rather than any specific age or sex predilection. Reactions may occur after stings on any area of the body.

In most people serious anaphylactic symptoms occur within a short period after the sting. The clinical symptoms may vary from person to person and are typical of anaphylaxis from any cause. The most common symptoms involve the skin and include generalized urticaria, flushing, and swelling. More serious symptoms are respiratory and cardiovascular and include upper airway swelling, circulatory collapse with shock and hypotension, and bowel spasms.

There are no absolute criteria that will identify people at risk for acquiring venom allergy for the first time. Most people who have had severe reactions have tolerated stings in the past with no difficulty.

NATURAL HISTORY OF INSECT STING ANAPHYLAXIS
People who have had insect sting anaphylaxis have an approximate 60% recurrence rate after subsequent stings. Viewed from a different perspective, not all people presumed to be at risk react to re-stings. The incidence of these re-sting reactions is influenced by age and severity of symptoms of the initial reaction. In general, children are less likely to have a re-sting reaction as compared to adults. The more severe the initial allergic symptoms, the more likely it is to recur. People who have had severe reactions have a greater than 70% risk of another re-sting reaction.

DIAGNOSTIC TESTS
The typical allergy skin test is the diagnostic test of choice to determine suspect allergy. Individual honeybee, yellow jacket, hornet, and wasp venom extracts are available for diagnosis. There are also blood tests that can be used for measuring allergy. In general, the blood test is not as sensitive as the skin test.

THERAPY
People who have had a history of allergic reactions from an insect sting and have detectable positive venom skin tests or blood tests are considered at risk for subsequent reactions. Recommendations for therapy include measures to minimize exposure to insects, availability of emergency medication for medical treatment of an allergic reaction, and specific venom immunotherapy.

AVOIDANCE
The risk of insect stings may be minimized by the use of simple precautions. Individuals at risk should protect themselves with shoes and long pants or slacks when in grass or fields and should wear gloves when gardening. Cosmetics, perfumes, and hairsprays, which attract insects, should be avoided. Black and dark colors also attract insects; individuals at risk should choose white or light-colored clothes. Food and odors attract insects; thus, garbage should be well wrapped and covered and care should be taken with outdoor cooking and eating. Insect repellents are not effective against stinging insects.

MEDICAL THERAPY
Acute allergic reactions from insect stings are treated in the same manner as similar reactions which occur from any cause. People at risk should be self-taught to administer epinephrine and advised to keep epinephrine and antihistamines available. Epinephrine is available in preloaded syringes and can be administered easily.

VENOM IMMUNOTHERAPY
Venom immunotherapy (VIT) is highly effective in preventing subsequent sting reactions. Over 98% of people treated properly do not react when re-stung. VIT is administered to people who have had a history of insect sting reactions and have positive venom skin tests. Guidelines are available to define the adequate dose of venom, the duration of treatment, and criteria to determine when immunotherapy can be discontinued.

Dr. Robert E. Reisman’s distinguished career spans more than 40 years, during which time he has been recognized for his extraordinary commitment to patient care and extensive research in the field of allergy and immunology. He joined the Buffalo Medical Group, PC, in 1988, and is board certified by the American Board of Internal Medicine and American Board of Allergy and Immunology. He is clinical professor of Medicine/Pediatrics at the University at Buffalo (UB) School of Medicine and Biomedical Sciences and an attending physician and allergist at Buffalo General Hospital and Women and Children’s Hospital of Buffalo. Dr. Reisman has authored or co-authored more than 200 articles, abstracts and book chapters, most of which address such clinically relevant issues as serum sickness, anaphylaxis, asthma, drug allergy, and in more recent years, stinging insect allergy. He is a Master in the American College of Physicians, and a Fellow and past president of the American Academy of Allergy, Asthma and Immunology, which honored him with its Distinguished Clinician Award in 2003. He was a member of the editorial board of the Journal of Allergy and Immunology and served on three Food and Drug Administration (FDA) committees related to allergens and vaccines.

You've heard from a patient. Now you will hear from a doctor. Topical Steroid Withdrawal, … END_OF_DOCUMENT_TOKEN_TO_BE_REPLACED

By Paul Ehrlich, MD The title above is from an excellent article in The Atlantic by … END_OF_DOCUMENT_TOKEN_TO_BE_REPLACED

By Dr. Paul Ehrlich and Henry Ehrlich We were saddened to read that our co-author … END_OF_DOCUMENT_TOKEN_TO_BE_REPLACED