While asthma and nasal allergies are medical conditions of the respiratory tract, they may play a role in childhood communication disorders. Up to 50% of children with speech and voice disorders also have asthma, allergic rhinitis, or both (Baker, Baker, & Le, 1982; Keating, Turrell, & Ozanne, 2001). The prevalence of speech issues in children without these respiratory illnesses is significantly lower. The frequent co-occurrence of bronchial asthma and allergic rhinitis results in an interplay of symptoms that may contribute to communication disorders including deficits in articulation, voice, and even language acquisition and reading.

1. Mouth breathing, around the clock or only during sleep, is a common sign of respiratory illness. While it helps compensate because air intake through the nose is blocked when the nose is stuffy or the lungs are “tight” it can aggravate asthma and allergies. Breathing through the nose filters and warms the air, preventing irritation to delicate respiratory tissue. Moreover, as mouth breathing aggravates respiratory dysfunction, it also damages the structure and function of the key players in speech articulation: the tongue, lips, and mandible. A habitually open-mouthed posture leads to a protruding tongue, lips that do not contact at rest, and a slack lower jaw. In these relaxed, floppy postures, the articulators cannot move quickly and accurately from one speech position to another. Try saying the Pledge of Allegiance with your tongue hanging out; you may sound positively unpatriotic. The moving parts must maintain tone to support rapid motion between precise positions in order to form the full range of sounds in distinct, articulate speech. 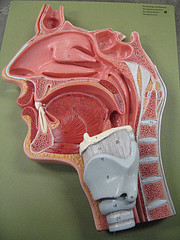 2. Poor breath control is another facet of respiratory illness that affects communication. Bronchial asthma and nasal allergies can cause shortness of breath and shallow breathing (from the chest or shoulder muscles rather than the diaphragm). In turn, lack of breath support can result in low voice volume, since loudness is directly related to the amount of air escaping from the lungs. Poor voice quality (hoarseness, roughness, or a strained/strident voice) results from inadequate or badly controlled airflow. Speech prosody (rhythm and intonation) also depends on exhalation: we must budget airflow to control the number of words we say per breath and the tone and loudness of particular words in a sentence (for emphasis). Breathe out so that your lungs feel empty, and, before inhaling again, say your name and address; can you get the whole thing out with the same power? Without breath support, you can’t talk for long, and what you do say will sound low and raspy.

3. Airway inflammation caused by allergies and asthma can hurt the sound quality of the voice. The vocal cords (a.k.a. vocal folds) cover the larynx, the top part of the trachea (airway tube to the lungs). These mucus-covered muscular bands are the vibrating “strings” that produce voice sound, which is then filtered and shaped by the resonating cavities of the throat, nose, and mouth. Inflammation along the passageways from the nose down to the larynx can impair vocal quality. Bronchial asthma, labored breathing and wheezing, and allergies can also cause sore throat and inflammation around the vocal cords. Swollen, inflamed cords don’t vibrate efficiently and can make the voice sound hoarse or scratchy. Nasal congestion due to allergies can lead to hyponasality–how you sound when you have cold–a resonance disorder. Since certain sounds in English (n, m, and –ng) depend on directing airflow through the nose, nasal congestion can also cause misarticulation (think of the child with a stuffy nose who asks her “bobby” for some Kleenex). 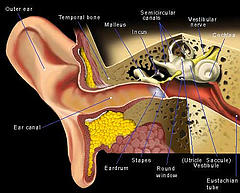 4. Hearing loss is a major factor in communication disorders, and nasal allergies may cause ear infections and congestion that result in hearing loss. The ears are connected to the nasopharynx (the part of the throat behind the nose) via the eustachian tubes, which equalize pressure on the eardrums (by “popping” when you take the elevator to the 20th floor) and drain excess mucus from the middle ear into the throat. In inflammatory conditions such as allergies or a cold, these tubes often become clogged, reducing the transmission of sound waves into the inner ear. The effect of congested eustachian tubes (aside from pain or pressure in the ears) is hearing loss, which can range from mild to profound. Although ear infections are transient, persistent allergies can cause multiple bouts of ear congestion and, thus, long-term damage to hearing.

For babies and young children, hearing loss is especially deleterious, since they are learning not only the vocabulary of their language but also the grammar, just by listening. English conveys a lot of its grammar through very soft, high-frequency sounds at the ends of words (think of the “s” at the end of our third-person present tense verbs, “He jumps” or the “t” sound at the end of many past tense verbs, “I jumped”). Not hearing these sounds causes children not only to mispronounce or omit them in their speech but also to neglect the differences in sound used to convey grammatical differences (a disorder of the underlying language system). Worst of all, poor hearing may lead to reduced literacy skills down the line, since reading is tied to phonological awareness (the ability to manipulate speech sounds). Even a few periods of ear infection can have serious ramifications for speech articulation, grammar, and literacy.

Left untreated, asthma and allergies can harm communication along with respiratory structures. Allergists and ENTs should provide medical management for illness, and parents and speech-language pathologists can offer behavioral supports and instruction in articulation and breathing techniques. It’s especially important to treat respiratory conditions in children, when their speech and language skills are in a critical period of development.

Jackie Ehrlich holds a master’s degree in English literature and has taught English and ESL. She is a speech-language pathologist working in New York City special education programs and has now trained and qualified as a nurse midwife in private practice.

You've heard from a patient. Now you will hear from a doctor. Topical Steroid Withdrawal, … END_OF_DOCUMENT_TOKEN_TO_BE_REPLACED

By Paul Ehrlich, MD The title above is from an excellent article in The Atlantic by … END_OF_DOCUMENT_TOKEN_TO_BE_REPLACED

By Dr. Paul Ehrlich and Henry Ehrlich We were saddened to read that our co-author … END_OF_DOCUMENT_TOKEN_TO_BE_REPLACED