This website has covered the progress of dupilumab, a monoclonal antibody to treat eczema, since before it had a brand name. The first sighting was in a presentation by Dr. Emma Guttman-Yassky of Mount Sinai. The before and after pictures, ideal accompaniment for a chicken dinner at the Harvard Club, were dramatic. Before looked like second and third degree burns. After looked bathing-suit worthy. Apart from this miracle drug efficacy, the other subject was the retail cost of the market version “Dupixent”. At $38,000, the price tag was so high that Regeneron’s CEO Leonard Schleifer anticipated that insurance companies might reject coverage and become an issue so he created a hashtag #deniedRX that itchy patients could use to share stories of being shot down. Presumably there would be a groundswell of pressure on the insurers. 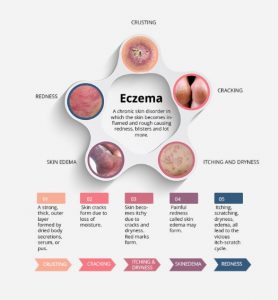 I learned about this in a biotech podcast produced by STAT, an excellent medical website, called The Readout Loud (highly recommended for anyone interested in the business of pharmaceuticals), and I looked it up. I learned it’s not as easy for a big company to go viral as it is for the typical no-talent reality TV star. It only collected 13 Tweets, the last of which was in March this year, and several of those were about scandals that bore no relation to the drug.

Who knows? Maybe Schliefer had visions of a cause celebre on the order of Mylan and EpiPen. But it’s one thing to ratchet an indispensable product up to scandalous prices over a period of years—dependent patients will be outraged–and another to start out scandalously priced and then light a match, hoping the outrage would burst out. In fact, as the folks at STAT pointed out, this stunt was generated to boost earnings. And it didn’t work; as of this past spring, when both Regeneron and its partner Sanofi lost stock market value based on disappointing Dupixent sales.

The other day, I had a dermatologist appointment. The first thing I said was, “it’s a big day for you!” He said, “You read about the approval.” Yes, indeed. This was clearly a big day in skin health.

Dupixent—the brand name for dupilumab, the first biologic for moderate-to-severe atopic dermatitis—has been approved by the FDA, and as we predicted the price is a stunner. In fact, this breakthrough therapy for a truly miserable disease is even higher than we speculated last year–$37,000 list price, for what looks like forever. We have to ask, what do we mean by affordable health care when one drug is priced like this?

Don’t get me wrong! This is a drug that will restore quality of life for millions of patients. I’ve been following it avidly for several years since I watched Dr. Emma Guttman-Yassky speak to the New York Allergy and Asthma Society over roast chicken and salad. The “before” slides she put up on the screen looked like napalm victims. Dr. Peter Lio described the misery of these patients for us when he wrote about the drug last year: “The relentless itch, continual skin breakdown, poor sleep, cracked and painful skin that can become infected: All of these are part of daily life for those with more severe eczema. The quality of life indices for this disease show that day-to-day suffering exceeds that of many other chronic conditions considered much more dangerous.”

The plight of these patients often begins in early childhood, and is a precursor to asthma and food allergies. As I wrote a couple of years ago, “People will go to great lengths to achieve some relief, even at the expense of their own long-term health. While most people are wary of steroids and will avoid their use even when it’s really bad for them, which happens often with asthma, AD patients will use them too much.”

How much will it really cost? The New York Times, which had an explosion of drug-price reporting last year because of the Mylan fiasco, did some excellent reporting on the new biologic.

Among the highlights, “Regeneron Pharmaceuticals and Sanofi took the unusual step of directly negotiating with insurers over the price and other details ahead of time….They also often must demonstrate that other, cheaper drugs did not work before an insurer will cover more expensive drugs. Regeneron has said it also negotiated a more streamlined approval process, although patients will still have to try other drugs first. It also said it had a patient assistance program to help people who have troubling paying.”

The Times also cited Dr. Steve Miller, chief medical officer at Express Scripts, the big pharmacy benefits manager, to the effect that the drug makers held all the chips because the drug works well and has no real competition. Also if it’s any consolation, the Times says that Humira and Enbrel, also for skin diseases, run about $50,000 list.

So what will they pay and when will they pay it? I asked Dr. Paul Ehrlich who said, “Since it’s only approved for patients 18 and up, it’s not going to be an issue for me since most of my patients are children.” For them, it’s wet wraps, topical steroids, and if all else fails referral to Dr. Xiu-Min Li. He did note that trials for younger patients are on their way, probably for ages 12-17 to start.

Our contributor, Dr. Purvi Parikh, who occupies the adjacent office to Dr. Ehrlich at Asthma and Allergy Associates of Murray Hill, adds, “This is a great non-steroidal alternative we can offer our severe eczema patients. Often eczema takes a toll on quality of life as well as self-esteem. It is nice to have another agent especially for those who have been reliant on steroids for many years with no avail.”

Promising though this treatment is, it won’t take patients by storm. Because of the expense, the criteria will include exhausting all other methods and then throwing them on the mercy of their insurance companies. I asked my dermatologist if he had any likely patients. “We’ll have to see.”

Welcome back, Dr. Peter Lio, the Chicago dermatologist who has honored this website with a number of excellent pieces on atopic dermatitis, the maddening skin condition that while not life threatening by itself can reduce patients to uncontrollable scratching and despair. Like other allergic conditions, notably asthma, the go-to medicines are forms of corticosteroids—in topical form and when things get really bad systemic steroids. These drugs produce periods of relief followed by rebound episodes that can end up worse than before, and also mood disorders. Now Peter returns with a piece on what looks to be a breakthrough drug. Indeed, as he points out, it has bee designated such by the FDA. (We have written about the “breakthrough” designation previously.)

I have been anxious to get some coverage of this new monoclonal antibody ever since I sat through a talk by Dr. Emma Guttman-Yassky at the New York Asthma and Allergy Society where we were treated to a sumptuous roast chicken dinner while watching slides of skin being transformed from what looked like second-degree burns to peaches and cream. A miracle, long overdue.

By chance, as I was preparing Peter’s article for preparation, a post came up on my Twitter feed from Investor’s Business Daily with the headline “Regeneron Could Add $604 Million to 2018 Top Line on Eczema” the estimate by a stock analyst named Adna Butt. Let’s face it. Miracles often cost a lot of money.

Butt writes that in a survey of 51 U.S. dermatologists who treat an average 4,300 patients per month, a majority said they have a pool of patients who could benefit from the drug immediately. Butt also says, “A minority expect to prescribe dupilumab to pediatric patients ahead of approval by the U.S. Food and Drug Administration, which could provide another upside,” with an eventual market around 2-million, out of 5-million eczema patients altogether. Unless some of them are cured by the drug, or achieve what Dr. Lio calls “deep remission,” or at least deep discounts, this is going to be big-ticket item for insurance companies and taxpayers, let alone individuals. Even at prices comparable to Xolair, the monoclonal antibody used for asthma and chronic urticaria, which runs $10,000 per annum compared to $32,500 for the asthma drug Nucala—well, you do the arithmetic.

(For a different perspective on treating moderate-to-severe eczema, read chapter five of Traditional Chinese Medicine, Western Science, and the Fight Against Allergic Disease.)

Australian wildfires are a daily part of the news cycle. Astronauts in the international … END_OF_DOCUMENT_TOKEN_TO_BE_REPLACED

By Dr. Paul Ehrlich and Henry Ehrlich We were saddened to read that our co-author … END_OF_DOCUMENT_TOKEN_TO_BE_REPLACED