The Journal of the American Medical Association (JAMA) has just published an article called “The Price of Pruritis: Sleep Disturbance and Cosleeping in Atopic Dermatitis” which describes in detail the toll that night itch takes on the rest of the family. 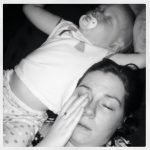 Atopic dermatitis often appears during the first months of life when sleep patterns are being established. Although approximately 10% to 30% of all children experience difficulties with sleep during the first few years of life, sleep disturbances are increased in children with AD because of itching and scratching, which interfere with the initiation and maintenance of sleep. Comforting behavior, learned associations, and habits influence the development of sleep patterns; in AD, itching and scratching become the association and behavior that disturbs sleep. In addition, the sleep patterns of the family of an affected child is likely disturbed, as parents awake to comfort or treat the children’s symptoms.

Videotape of older children without current eczema during sleep studies reveal that the habits of scratching and “reduced sleep efficiency” they developed when they are little persist even during periods of remission. These kids warrant study because disordered sleep registers in their daytime behavior. “Consequences of sleep abnormalities in AD include greater difficulty awakening, daytime tiredness, and irritability. Moreover, difficulty falling asleep and night waking in children with AD correlate with daytime behavior and discipline problems.” I hasten to note that I learned during research for writing a previous book with a sleep specialist (now sadly out of print), these behaviors frequently register as something else at school and at home. The inventory of symptoms of poor sleep is almost identical to the symptoms of ADHD, which may result in prescriptions for Ritalin and Adderall instead of better rest.

The current study was the first to study the sleep of smaller kids, surveying parents and caregivers recruited from pediatric dermatology practices as to the “prevalence of sleep disturbance and cosleeping in children and parents, and to determine the relationship between these sleep characteristics and features of the patient, the disease, and child and parent happiness.”

Thirty percent of parents reported that their children sleep with them part or all the time and that it hurt their sleeping, too, and damaged their own daytime performance.

Faced with this data, I did what I always do when the skin is involved. I sent the link to Chicago dermatologist Dr. Peter Lio. He wrote back:

Sleep disturbance has long been known to be a feature of more severe AD, but has come under increasing attention in the past several years. It has been suggested that at least some of the behavioral and learning issues associated with AD may actually be related to the sleep troubles so common in patients.

Importantly, the sleep disturbance does not just affect those with eczema; often multiple family members suffer along as well. I have seen many a bleary-eyed mother and father who have been up multiple times at night with their child scratching and uncomfortable. There is no doubt that this affects the psychological health of the family, but as we think about the situation holistically, certainly this has health ramifications for those suffering as well. The immune system is intimately related to stress responses, and many studies have shown that poor sleep weakens the immune system and can directly damage the skin barrier.

Practically speaking, these findings remind us that we are not “just treating the symptoms” when we use anti-inflammatory medications for eczema, we are helping to break a terrible cycle of suffering, sleep deprivation, and inflammation in the skin and body. As a clinician, one of the most important signs that things are improving is when families report better sleep. The combination of better sleep and better skin almost always equals big smiles.

You've heard from a patient. Now you will hear from a doctor. Topical Steroid Withdrawal, … END_OF_DOCUMENT_TOKEN_TO_BE_REPLACED

By Paul Ehrlich, MD The title above is from an excellent article in The Atlantic by … END_OF_DOCUMENT_TOKEN_TO_BE_REPLACED

By Dr. Paul Ehrlich and Henry Ehrlich We were saddened to read that our co-author … END_OF_DOCUMENT_TOKEN_TO_BE_REPLACED