Only yesterday, food allergy advocates spent hours testifying before a California legislative committee on behalf of an access-to-epinephrine bill for school children. It is a scene that has been repeated in state after state, with favorable legislative results and even more notable health outcomes. I have nothing against this process, which seems to be a rare instance of widespread bi-partisanship at the state level, in the wake of President Barack Obama’s endorsement of the principle and his announcement that one of his children is allergic to peanuts. 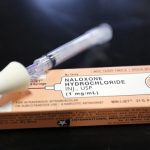 Still, I was somewhat surprised to see in this morning’s New York Times that the FDA is moving at lightning speed (for a federal agency) to approve access to a device to rescue addicts who are overdosing.

“The hand-held device, called Evzio, delivers a single dose of naloxone, a medication that reverses the effects of an overdose, and will be used on those who have stopped breathing or lost consciousness from an opioid drug overdose. Naloxone is the standard treatment in such circumstances, but until now, has been available mostly in hospitals and other medical settings, when it is often used too late to save the patient.”

The device is even compared to an EpiPen autoinjector, although the report describes EpiPens as used for insect stings and omits food allergies.

I did most of my medical training at Bellevue Hospital in the 1970s. I know what it’s like to treat a heroin overdose. It didn’t take the death of Philip Seymour Hoffman to alert me to the tragedy of opioid abuse, either heroin or prescription drugs that flow all-too-freely into the hands of addicts, which now account for half of overdoses. I was struck by the statistics in the Times article: “Deaths from opioids have quadrupled in 10 years to more than 16,500 in 2010, according to federal data.”

As a matter of public health, however, fast-tracking life-saving medication shouldn’t depend on body counts. Epinephrine auto-injectors are safe, effective, and convenient. They should be in all schools and teachers should be trained in their use (and by the way schools should let children carry their own asthma medicine, too). Putting them there shouldn’t depend on grinding it out in state capital after state capital.

This was the first of several chats I had with Dr. Peter K. Smith, whose "False Alarm … END_OF_DOCUMENT_TOKEN_TO_BE_REPLACED

This was the first of several chats I had with Dr. Peter K. Smith, whose "False Alarm … END_OF_DOCUMENT_TOKEN_TO_BE_REPLACED