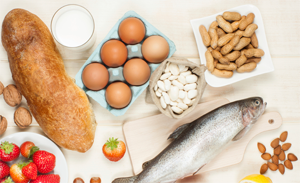 We have come a long way since 1997 when the US 1 and other international guidelines 2 recommended delayed introduction of food allergens to prevent the development of allergic diseases. Over the last decade a number of studies have added to our current pool of knowledge, and lead to changes in infant weaning recommendations. However, two randomised controlled trials from the UK 3, 4 and one UK government funded systematic review 5 have contributed significantly to this recent paradigm shift.

LEAP taught us two key points: not only is there tremendous potential benefit in preventing peanut allergy in introducing peanut in the first year of life, but more importantly, there is potential harm in recommending infants avoid peanut during that year.

However, the study did not address two other important questions:
– What advice should we give regarding infants at low risk of developing food allergies? Remember, in LEAP all participants were considered to be at high-risk of developing peanut allergy.
– What advice should we give regarding when to introduce other allergenic foods? LEAP very strictly involved early peanut introduction, and nothing about any other food. While this is helpful, there are many other potentially allergenic foods that we still do not know about.

Eating your cake
Some of these open questions were foreseen to some extent by the UK government, which funded the Randomized Trial of Introduction of Allergenic Foods in Breast-Fed Infants (EAT study)4 to help address these issues. They focussed six allergens (milk, egg, wheat, cod, sesame and peanut), but only in children who had NO risk factors for allergy (the flip-side of the LEAP population). The aim of this study was to introduce the allergens in the active group from 3 months of age and adhere to UK weaning advice in the control group (table 1). In the control group participants were to be exclusively breast-fed to approximately 6 months of age. After 6 months, the consumption of allergenic foods was allowed according to parental discretion.4

This trial was much harder to conduct and ran into some practical difficulties such as the “willingness” of the infants to eat certain foods; even infants have minds of their own. Complicating the process is confusion over two statistical methods for analyzing the results. The preferred way, known as “intention to treat” analyzed the results from all who agreed to participate, both in the active group and the control group. This was the preferred method under UK guidelines because it reflects likely patient behavior in the real world. They showed that there was a 20% reduction in food allergy prevalence in the early introduction group, but this was not deemed statistically significant. Intention to treat analysis encompasses all who started the protocol, active or placebo, despite that fact that many of them didn’t finish for a multitude of reasons, which make it more difficult to reach statistical significance. For instance, parents who felt their child might be developing symptoms of allergy may have simply dropped out.

Including only participants who actually followed the study instructions, focusing on peanut and egg allergy only, showed a statistically significant reduction in food allergy prevalence of 67%. However, we can conclude that the EAT study showed that there is no need to delay the introduction of food allergens once weaning has commenced, and that age of introduction was not associated with a large risk of developing allergy.

Just as seen with the LEAP study, many questions were raised by the EAT study:

1) Is the US ready for early allergen introduction? A study by Luccioli and colleagues6 in 2014 showed that no infants in their US population introduced peanut, egg or fish before 6 months of age. Recommendations to introduce all allergens early therefore will affect weaning patterns and food intake of future generations to come. It is well-known that food intake/avoidance in early life7 affects food preference later on in childhood; perhaps for life.
2) Who is going to lead on this “shift” in weaning practices? How will this affect other allergy services and how will the services be reimbursement? There are ~4,000,000 US children under the age of one year with only 5,500 allergists and less than 500 registered dietitians/nutritionists (RDNs) with interest or training in allergy who will have to lead the way.
3) Has any guidance on the “other” allergens been published? Currently the only US guidance for early allergen introduction is the Addendum Guidelines for the Prevention of Peanut Allergy in the United States from the National Institute of Allergy and Infectious Diseases8. In terms of the other allergenic foods, these guidelines states that “insufficient evidence exists for delaying introduction of solid foods, including potentially allergenic foods, beyond 4 to 6 months of age, even in infants at risk of developing allergic disease.” This statement was in slight contrast to a meta-analysis published in JAMA in September 2017 (pre-dating the NIAID guidelines), which showed significant risk reduction associated with egg introduction at around 4-6 months of life. The only other international guideline published since the LEAP and EAT is the Australasian Society of Clinical Immunology and Allergy (ASCIA) guidelines for infant feeding and allergy prevention, which states that “all infants should be given allergenic solid foods including peanut butter, cooked egg, dairy and wheat products in the first year of life. This includes infants at high risk of allergy.” The recently revised ASCIA guidelines recommend introduction of solid foods should occur “around 6 months but not before 4 months”9.

So – what is our practical take on introduction of allergens beyond peanut?
– Start weaning when the infant is developmentally ready, no later than 6 months and as early as 4 months if developmentally ready
– Start simple. Iron fortified grains and/or fruits and vegetables are generally the first recommended foods for weaning, to allow the child to master the developmental skills of eating solid food
– Introduce peanut according to the NAIAD guidelines, but only after the child has tolerated a few other solid starter foods. Peanut is not intended to be baby’s first food!8
– Peanut butter should be modified by thinning with water or breast milk as peanut butter from a spoon (and whole peanuts) are choking hazards.
– Milk is often introduced early as more than 80% of mothers in the US start introducing infant formulas (and solid foods) before 6 months of age.
– There is some concern that there may be a risk of severe reactions and risk of bacterial food-borne illness when introducing raw egg or uncooked egg to young infants, and therefore one should start with baked10, heated11 or boiled egg4. Egg yolk cannot be effectively separated from the egg white, so starting with egg yolk has no advantage as this still contains egg white contaminants.
– In terms of wheat, only a few studies looked at the age of wheat introduction and wheat allergy outcomes. All these studies included multiple interventions, but a systematic review of the data showed there was no evidence that timing of wheat and fish introduction to the infant diet influences risk of FA.5  The authors also concluded that the age of gluten introduction was not related to the development of celiac disease.
– In terms of introduction of other allergens such as fish, sesame, soy, and tree nuts there is a lack of information to make any recommendations other than that these foods should be eaten according to family practices.
– Remember, other than the new specific recommendation for early introduction of peanut, the existing advice, in place since 2008, stated that there was no advantage to delaying the introduction of solid weaning foods past 4-6 months of life.
For practical ways to introduce the other food allergens please see https://carinaventeronline.com/ways-to-introduce-other-allergens/

The authors want to highlight that the findings with respect to egg and other food allergens await incorporation into US clinical practice guidelines, though this is anticipated. 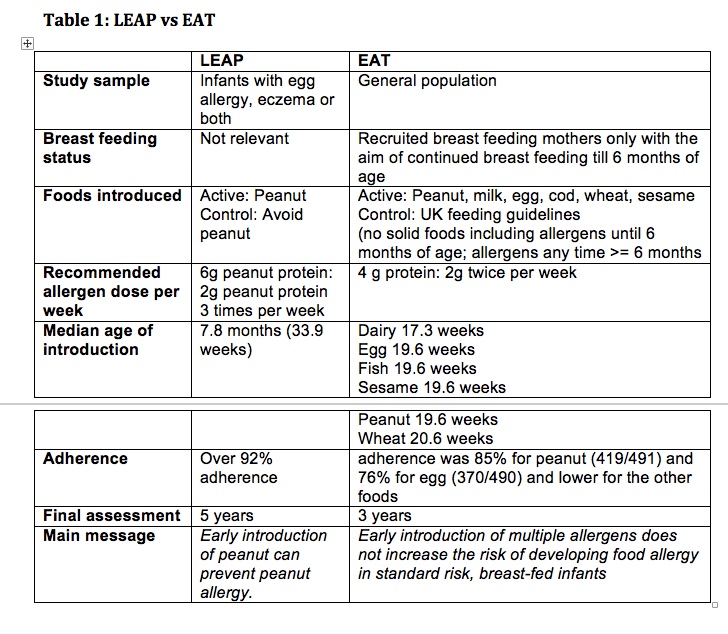 Dr. Carina Venter is currently an Assistant Professor of Pediatrics, Section of Allergy and Immunology at the 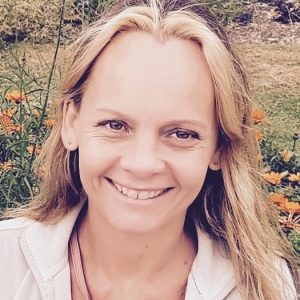 Children’s Hospital Colorado and University of Colorado Denver School of Medicine, where she is conducting research and working with children and adults with a range of food allergies. Previously, she was appointed as an Assistant Professor/Dietitian at Cincinnati Children’s Hospital Medical Center. She is currently the chair of the International Network of Dietitians and Nutritionists in Allergy. She was a member of the EAACI food allergy guidelines on Allergy Prevention, as well as Diagnosis and Management of Food Allergy.  She was also a member of the NICE (UK) food allergy guidelines. Since her arrival in the US, she was appointed to the expert panel of the National Institutes for Allergy and Infectious Diseases Peanut Allergy Prevention Guidelines. She blogs on https://carinaventeronline.wordpress.com, and she is a top twitter allergy activist at most international allergy meetings (@VenterCarina).

Marion Groetch, MS, RDN is the director of Nutrition Services at the Jaffe Food Allergy Institute at the 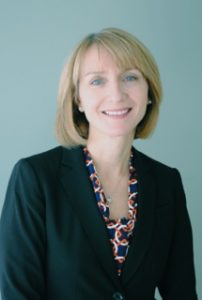 Icahn School of Medicine at Mount Sinai in NYC.  Marion is a frequent invited lecturer both nationally and internationally on diverse topics related to the nutritional management of food allergies and has written 9 text book chapters and more than 20 peer reviewed publications with over 200 citations, including authorship on two American Academy of Allergy, Asthma and Immunology (AAAAI) Consensus Guidelines in 2017.  Marion earned the 2015 AAAAI Allied Health Professional Recognition Award for her service to the allergy/immunology allied health community as a leader, mentor and educator. 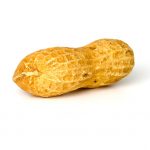 New guidelines for introducing peanut into the infant diet made it onto the front page of the New York Times. This is the culmination of two years of coverage of the LEAP study, which we have been following all along. The article quotes Dr. Anthony Fauci, director of the National Institute of Allergy and Infectious Diseases (NIAID) on the front page who calls it “game changing.” After the jump, the chief voice is Dr. Matthew Greenhawt, chairman of the American College of Allergy, Asthma and Immunology’s food allergy committee, and an author of the new guidelines. He concludes, “This won’t outright prevent every single case of peanut allergy – there will still be some cases – but the number could be significantly reduced by tens of thousands. In the best-case scenario, every allergist across the U.S. could be seeing fewer cases of peanut allergy — and that’s a good problem to have.”

I have nothing new to add to the news of the day, except that as a practitioner I have been coping with it for two years since Dr. Gideon Lack and Dr. George DuToit shook the food allergy world with their finding announced at the 2015 AAAAI meeting (analyzed here), which reversed years of conventional wisdom on withholding allergens from kids’ diets.

Such radical reversals do have consequences in the real world of clinical practice. Just this week I met with a mother and her infant son. Months ago, we determined that he fell within the early parameters for risk and we introduced peanut into his diet. So far so good.

Except that his older brother, who is allergic, has been watching the mother give the baby peanut, and he is good and mad. He wants it, too.

Click here for practical advice on implementing these guidelines, the American College of Allergy, Asthma & Immunology.

By Dr. Paul Ehrlich and Henry Ehrlich We were saddened to read that our co-author … END_OF_DOCUMENT_TOKEN_TO_BE_REPLACED

By Dr. Paul Ehrlich and Henry Ehrlich We were saddened to read that our co-author … END_OF_DOCUMENT_TOKEN_TO_BE_REPLACED

I recently began corresponding on Twitter with Dr. Brian A. Brennan, an allergist in Sioux … END_OF_DOCUMENT_TOKEN_TO_BE_REPLACED

By Dr. Paul Ehrlich and Henry Ehrlich We were saddened to read that our co-author … END_OF_DOCUMENT_TOKEN_TO_BE_REPLACED