The Allergy Epidemic
Allergic diseases have increased dramatically over the past 25 years, but the nature of the epidemic has changed. While the prevalence of environmental allergies—the ones that make us sneeze and wheeze–may have leveled off in recent years, skyrocketing rates of food allergies in children have been dubbed the “second wave” (1). Although studies have shown that allergies do run in families, genetics alone cannot explain these troubling trends.

Many ideas have been offered up to explain the allergy epidemic. One of the first was the “hygiene hypothesis”, which suggests that we are too antiseptic for our own good. Global warming may play a role, as the planet is getting too hot and making for longer pollen seasons. Traffic related air pollution has increased. Our crops are too heavily fertilized; our food is over-processed or genetically modified. We take too many antibiotics.

While all these are relevant, proof is lacking. But what if we could link environmental changes to specific physiological responses? What if we could show that these responses not only are changing ourselves but our children and future generations? In fact, intense research on the interaction of genes and the environment is now yielding clues to how and why allergies are not only allergies are getting worse, but other diseases of the immune system as well.

Beyond the DNA Code
Epigenetics, a new branch of genetic research, is the science that may help explain key gene-environment interactions. This is the study of changes in certain characteristics that can be passed from one generation to the next without changing in the DNA code(2) itself.

The epigenome can be thought of as the “clothing” of the genome. Some layers change significantly during development and can be modified throughout life, whereas other layers remain relatively permanent. Differences in these layers lead to differences in gene expression—when and how genes are activated. This may explain why individuals with the same or similar DNA may have very different health outcomes. Two important components to the “epigenetic code” are DNA methylation and histone modification. DNA methylation involves the chemical modification of cytosine residues in the genome, generally resulting in gene “silencing” (i.e. the gene is switched off and can not be activated). Histones are proteins that help to package the DNA. Histones may undergo a variety of modifications, and work together with DNA methylation to affect how accessible the DNA is for expression.

A Newborn’s Genes Come with “Baggage”
The physical and temperamental differences between men and woman are obvious. But new science also shows marked differences between the way their respective reproductive cells, the sperm and egg, behave from conception on, with lifelong consequences for the child.

Within the sperm, paternal DNA is highly methylated. After fertilization, the father’s genome undergoes rapid demethylation, while the mother’s genome is demethylated more slowly(3). During this epigenetic reprogramming process, some parental epigenetic marks are lost and some are maintained, in a manner that is not fully understood. Epigenetic “imprinting” occurs, which may help to explain why complex diseases, such as asthma, seem to come from the father, while others may come from the mother. Researchers are now recognizing that a variety of adult diseases such as diabetes, cancer and psychological disorders actually have prenatal origins(4).

Epigenetics and the Developing Immune System
“Over-reactions” of the immune system can be dangerous. This is an idea that is familiar to every family with allergies; for reasons we don’t completely understand, a “harmless” peanut protein can be recognized as a deadly parasite, unleashing the full force of the immune system. The prenatal environment is critically important to the developing immune system and may set some children up to be vulnerable to these over-reactions. Regulatory T cells (Tregs) are a special subset of T cells that act as peacekeepers, preventing the immune system from overreacting to certain triggers.

DNA methylation has been shown to control the “master” Treg transcription factor, FOXP3—the protein that binds to specific DNA sequences, and controls the flow of genetic information. Disrupt that and the effectiveness of peacekeeper cells will be compromised. Recently, umbilical cord blood of babies born to allergic mothers has been shown to have reduced numbers of Tregs(5). This was further associated with atopic dermatitis at the age of one year, which is the first step in the “atopic march”. It suggests that epigenetic mechanisms mediate important cross-talk between a mother’s immune system and that of her developing infant.

Another important cell type is the dendritic cell. Antigens are any protein that the immune system can 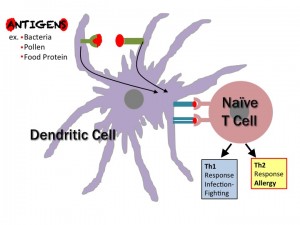 recognize. Antigens include pieces of bacteria, viruses, pollen, dust and food proteins. Dendritic cells are special cells located all over the body, including the mouth, nose, intestines, and skin. They are responsible for capturing and processing antigens and “showing” them to T cells, while helping to decide what type of response that the T cells have. When the T cells have a Th1 response, it can be good for fighting bacteria. When the T cells have a Th2 response, it can promote allergic reactions. Recent mouse studies have suggested that dendritic cells are responsible for passing on allergic risk from mother to child. Epigenetic differences were demonstrated in dendritic cells harvested from mice born to allergic mothers, before these young mice had grown to the point where they could exhibit allergic tendencies of their own(6). When the “allergic dendritic cells” were transplanted into normal mice, the increased allergic risk was also passed on. These findings await confirmation in humans, in part because it is harder to work with people in the laboratory than it is with mice. However, they do suggest that the immune system can undergo epigenetic imprinting that may lead to an increased risk of allergy.

Allergic Imprinting In-Utero?
Other environmental factors, such as maternal nutrition, have the potential to affect epigenetic imprinting and a child’s future health. Although it has long been known that the health and lifestyle of a mother impacts on her children, epigenetics has shown some of the specific mechanisms at work. Mouse studies have shown that eating a diet excessively rich in “methyl donors” such as folate during pregnancy results in offspring that are more susceptible to asthma. This pro-allergic effect was also inherited in the next generation (i.e. grandchildren). In humans there have been conflicting results from studies examining folate supplementation and allergy. As folate is important for the prevention of neural tube defects, supplementation remains a cornerstone of prenatal care. However, there is evidence that allergy is passed on in part through epigenetic imprinting. In a retrospective cohort, maternal allergy symptoms during pregnancy have been associated with allergies in their children(7). Therefore, gene-environment interactions in utero modify the epigenetic code in ways that may drive the development of allergic disease.

How the Environment Affects Our Genes
Environmental exposures are known to induce epigenetic changes. There is evidence, however, that prenatal exposures known to increase the risk of childhood allergy, such as maternal smoking, may act at least partly through epigenetic mechanisms. Smoking during pregnancy has been shown to induce changes in DNA methylation in exposed children, some of which carry over to grandchildren(8). Air pollution is another environmental exposure under intense study for its immune-modulating effects. Recently, Nadeau et al. examined FOXP3 DNA methylation in Tregs in relation to ambient air pollution exposure(9). Increased methylation was found in the blood Tregs of asthmatic children from an area with high air pollution levels, compared with asthmatic children from an area with low air pollution levels. Thus, epigenetic modifications in important immune system cells are modified by environmental factors.

Why Prospective Studies are Needed
It has been shown that the prenatal environment can have lasting effects on health outcomes, mediated at least in part through epigenetic modifications. To begin to understand why some children develop allergies and others do not we need to unravel the complex immune and environmental factors at play in utero and in early life. Prospective studies such as birth cohorts beginning during pregnancy are needed to collect important data and biological samples before children develop allergies, as this is the only way to isolate the root causes of allergic disease. These studies will require multidisciplinary collaborations between obstetricians, allergists and environmental health specialists. At Queen’s University and Kingston General Hospital (KGH) we have established the Kingston Allergy Cord blood Epigenetics (KACE) cohort, which is specifically focused on studying the developmental origins of allergic disease. The demographics of the area have allowed us to capture rural and urban participants with different environmental exposures. Only time will tell how useful epigenetics might be in predicting which children will be affected by allergic disease. However, what is certain is that research thus far has only scratched the surface in terms of our understanding of how epigenetic events in utero and early life act to have long-standing consequences on our health.

Australian wildfires are a daily part of the news cycle. Astronauts in the international … END_OF_DOCUMENT_TOKEN_TO_BE_REPLACED

By Dr. Paul Ehrlich and Henry Ehrlich We were saddened to read that our co-author … END_OF_DOCUMENT_TOKEN_TO_BE_REPLACED