Last week the AAAAI and the ACAAI told allergists that there would be ample supplies of life-saving extracts for hymenoptera allergy shots. It stings to say this but today another bulletin went out.

Working to Address Costs and Availability 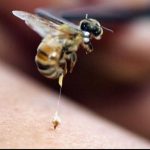 The AAAAI and ACAAI recognize that there are growing concerns among our members regarding venom immunotherapy related to recently announced changes. Among these is the lack of availability of venom extracts for allergists in Canada that could have an impact on availability of this critical therapy for Canadian patients. In addition, we are aware that there are selected shortages of venom in certain areas of the United States. Finally, cost increases in venom extracts appear to be on the horizon.

Both organizations are actively working on various approaches to address all three issues noted above. We are focused on insuring that life saving therapy for patients with venom hypersensitivity remains readily available and affordable for the patients we serve. We will continue to keep you updated on this situation.

Spring is coming. Be careful out there. 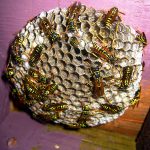 The approach of warmer weather has been accompanied by a bit of (for want of a better word) buzz about allergies to insect stings.  There seems to be some confusion about the need for testing, the process of testing, and treatment if it’s deemed necessary.

The post by the late Dr. Robert Reisman we published some time ago gives you everything you need to know.  Bob died last year and it is a great loss to the field of allergy, but the good that he did lives after him.

That said, I want to address some of the facts about these allergies and the misunderstandings that have come to our attention.

Second, the most important diagnostic tool as for all other allergies, is a history of reactivity.  That is, you will have a reaction the second time you are stung (don’t forget that allergy is a remembered response) if you are indeed allergic.  You can’t have antibodies to something unless you have been exposed to it.

Third, routine testing for hymenoptera (Greek for the category of stinging insects) allergies is not generally done because the seasonal and geographical nature of the risks involved make stinging insects pretty easy to avoid.  However, when adventurous souls who have been stung take up beekeeping as a hobby, or do a lot of hiking, or play golf very often, it may be warranted.  (Larry has a great story in our book about a friend who preferred to risk his life rather than give up golf.)  That said, skin testing for insects stings is no more arduous than any other skin testing.

Some people claim that their allergists told them the test is a prolonged process, but they may have it confused with the immunotherapy.  Allergy shots (subcutaneous immunotherapy or SCIT) for insect stings are very effective—we start with one unit of antigen and build up to 50 units at dose 14, at which point you are desensitized.   However, it doesn’t last—a booster once a month is necessary to maintain protection.  I remember when Bob was doing the basic research—first he thought three years, then five, and finally he said that it’s safer just to get the regular doses.

Mosquitos are a separate issue.  As we say in the book, unlike venomous insects, mosquito allergies are a reaction to the saliva the nasty little things leave behind when they bite (along with things like malaria depending on where you live).  Unfortunately, there are no commercial extracts for doing immunotherapy. When I was training at Walter Reed Army Medical Center, which served the military, we made up our own serum, which was deemed useful since so many service people were deployed to mosquito-ridden climes—prominently at the time, that included Vietnam.  When I left the service, however, it was discontinued and I was allowed to take a large stock of the extract with me to use on my patients.  However, when I ran out, that was the end of allergy shots for mosquitos.

None of this is to minimize the dangers of stinging allergies.  As Bob wrote, insect stings do account for 50 fatalities annually in the United States, and it’s possible more occur but are not documented.  Our Guest Editorial a few weeks ago gives a vivid account of anaphylaxis to a bee sting.  But all patients and patients’ parents are better served by knowing the clinical realities.

You've heard from a patient. Now you will hear from a doctor. Topical Steroid Withdrawal, … END_OF_DOCUMENT_TOKEN_TO_BE_REPLACED

By Paul Ehrlich, MD The title above is from an excellent article in The Atlantic by … END_OF_DOCUMENT_TOKEN_TO_BE_REPLACED

By Dr. Paul Ehrlich and Henry Ehrlich We were saddened to read that our co-author … END_OF_DOCUMENT_TOKEN_TO_BE_REPLACED