A few Saturdays ago my phone rang. It was the tearful voice of a friend, an educator, telling me that a student had died the night before from an asthma exacerbation. She had spent time with this child during the day. He seemed to have a lot on his mind. The first thing I said was, had he been using his inhaler, to which my friend said he had used it while they were talking. Why did I ask? Because I had learned that frequent resort to albuterol is a sign that asthmatic inflammation is not controlled, but people think that as long as the inhaler stops the wheezing it is. 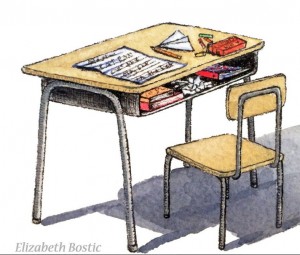 This was deeply disturbing to my friend. She and her colleagues had worked for years to ensure a food-allergy friendly environment in which every staff member learned the signs of anaphylaxis and had to practice giving epinephrine. The lesson was re-taught every year. All the kids with a history of anaphylaxis were identified. Food handling is supervised. And finally, most importantly in some ways, children and grownups are woven together in a spirit of community, although the hallmark of this school is diversity as defined by differences in ethnicity, household income, and educational need. Bullying is dealt with promptly and firmly. Looking out for food allergies is ingrained in the school and the only incident for many years involved a substitute teacher. This ethic of caring goes way back–two of my grown kids went there. The tragedy struck the community very hard. By the time a student reaches fourth grade, he has touched the lives of hundreds of students and dozens of teachers.

So why, my friend wondered, had they missed out on learning the signs of uncontrolled asthma? That’s a tough one to answer quickly. Food allergies are instantaneous and alarming. Exposure happens on the spot, it doesn’t linger from the night before, or simmer for days and weeks on end. Events manifest as a crisis and parents and teachers are galvanized to action; it can be managed with eternal vigilance and treated in the breach.

Asthma, by contrast, is common and somehow “normal.” Inflammation can spike without necessarily making the patient symptomatic. It can be managed through vigilance but also with medication, but the demons are in the fine print. Which medication? It is easier to respond to wheezing with a temporary fix–albuterol–than it is to routinely monitor peak flows and take controller medication as prescribed to reduce inflammation. New York City interest in the condition peaked in 1989 when schools chancellor Richard Green died of an asthma attack. Stress is a trigger, and that was a stressful job. Still is. But whatever public awareness of the problem it might have engendered has faded with time, and for educators like my friend, with hundreds of children and thousands of rules that must be attended to in the course of a school year, asthma symptoms fall between the cracks. A child is only in front of school personnel or parents for part of the day. They don’t always compare notes.

My cousin Paul has written on this website about an AAFA-affiliated program he helped create years ago that boiled what to look for down to these three questions:

These behavioral indicators can signal asthmatic inflammation. Obviously, parents and teachers only glimpse part of this picture. Asthma isn’t the only thing that wakes children at night. Inattentiveness in the classroom or lethargy at recess can happen to anyone. But when they are part of a pattern, and when the child has a history of allergies or asthma, the pieces do fall into place. Asthma produces changes in blood chemistry that are strongly associated with both anxiety and depression, which have consequences for behavior. The fact that the poor child had ended up requiring intervention on that last day could have been an additional clue to the underlying body chemistry.

My first foray into allergic medicine was when I spent months chronicling the experience of my cousin with his creation Project ERASE, which brought asthma specialists into public schools on a regular basis with huge payoff in attendance and performance by the asthmatic children, as well as school morale and shared purpose. But it involved intensive use of physician time and spools of red tape both with the Department of Education, and, since the visiting doctors couldn’t actually treat the kids, intensive conversations with their “regular” physicians, including emergency room staff who were in some cases the only doctors these kids had seen for their asthma. It couldn’t survive after the philanthropy of public relations firm Fleishman Hillard ran out. Unfortunately the need for it never ends, as my friends at this particular school have now learned.

I know the teachers, some of whom have been there since the days my kids attended. Nothing that happens is too small to become a teaching moment and this one looms very large. The first takeaway has been to make sure that every time students use an inhaler, they are sent to the nurse (yes, they have a nurse, which in some parts of the country sounds like a miracle) to review their health status. Second, the inhaler must have a spacer, which greatly increases the chance that uptake will be effective. Third, presentations are being made to all constituencies–students, teachers, and parents, on the nature of the problem. And much more. Paul and I are going to help. He will speak and I am already kicking in with statistics and resources to support an effort to get a grant to create a model program. We are going to supply copies of our book at cost.

This is an exemplary school. It has been studied and lauded and the community has much to be proud of, but this tragedy has also marked them. They are determined to learn from it.

Thanks to Elizabeth Bostic for the original art. Her previous work can be found here.

You've heard from a patient. Now you will hear from a doctor. Topical Steroid Withdrawal, … END_OF_DOCUMENT_TOKEN_TO_BE_REPLACED

By Paul Ehrlich, MD The title above is from an excellent article in The Atlantic by … END_OF_DOCUMENT_TOKEN_TO_BE_REPLACED

By Dr. Paul Ehrlich and Henry Ehrlich We were saddened to read that our co-author … END_OF_DOCUMENT_TOKEN_TO_BE_REPLACED