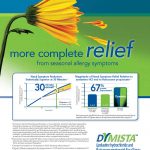 Our readers know we like to keep up with innovations in diagnosing and treating allergic diseases, and we are happy to highlight the work of industry leaders who are either doing something so leading edge that the rest of the industry must play catch-up, such as the component testing made by ThermoFisherScientific and AD RescueWear, or newcomers whose products represent a legitimate advance on the way things are done, such as AsthmaSense, Asthmapolis, and Auvi-Q. Thus, we alert you to the first combination therapy of an antihistamine and a nasal steroid, Dymista, for seasonal allergy symptoms, which we spotted as a sponsor of a recent meeting of the New York Allergy And Asthma Society.

The active ingredients are the antihistamine azelastine and the steroid fluticasone. These ingredients have been on the market separately for a long time, azelastine as Astepro, used at five years and up. In our book we list possible side effects as “bloody nose” and “may cause drowsiness. The steroid is sold as Veramyst, for use, like Dymista at 12 years and up. We warn about the possibility of bloody nose for this, too, and as with all corticosteroids, “monitor growth” is a consideration. We also say, “The FDA recommends allowing [inhaled nasal steroid] in younger patients for short periods of time, as for seasonal allergic rhinitis.”

I asked Dr. Ehrlich about Dymista and he said that both because it is new and because it can be prescribed for 12 years plus, he hasn’t given much of it. Still, looking at the company’s literature there is much to recommend it for those whose noses continue to suffer even after they have used saline solution—our low-cost, low-tech favorite—and generic over-the-counter antihistamines. If you want both to control nasal allergic reactivity and inflammation, it’s easier and probably cheaper to do it with a single dose twice a day than two separate medicines each twice a day. The fewer moving parts and tasks, the more likely you are to comply. Thus, with combination asthma medicines like Advair and Symbicort, which contain both a steroid and a bronchodilator. The company’s own literature says that symptom relief from the combination therapy is substantially higher than from each component separately, and that it is also more effective measured at 30 minutes after use compared to placebo.

By coincidence, a comparison of nasal azelastine, oral loratadine (Claritin), cetirizine (Zyrtec), and placebo popped up in the May issue of Allergy, Asthma & Clinical Immunology. Lead author was our contributor Dr. Anne K. Ellis. The researchers concluded: “Azelastine’s onset of action for symptom relief was faster than that of cetirizine and loratadine. The overall participant satisfaction in treatment with azelastine is comparable to cetirizine and statistically superior to loratadine. These results suggest that azelastine may be preferential to oral antihistamines for the rapid relief of SAR symptoms.”

You've heard from a patient. Now you will hear from a doctor. Topical Steroid Withdrawal, … END_OF_DOCUMENT_TOKEN_TO_BE_REPLACED

By Paul Ehrlich, MD The title above is from an excellent article in The Atlantic by … END_OF_DOCUMENT_TOKEN_TO_BE_REPLACED

By Dr. Paul Ehrlich and Henry Ehrlich We were saddened to read that our co-author … END_OF_DOCUMENT_TOKEN_TO_BE_REPLACED