The first commercial oral immunotherapy product for food allergies has come through a phase 3 clinical trial, clearing the way for commercial release, possibly in 2019. The drug (made from peanut flour) received one of the highest honors in the world of medical publishing: publication in the New England Journal of Medicine. The co-authors are a food allergy all-star team, including several who have contributed to this website.

Although for the time being it is peanut only, Daniel C. Adelman, M.D. the head researcher for Aimmune Therapeutics, the company that made it, and lead author told me last year that it was the company’s ambition to be the largest maker of food immunotherapy products in the world. Dr. Brian Vickery, MD, Director, Food Allergy Program, Children’s Healthcare of Atlanta who led the international trial, said, “This was the largest clinical trial ever conducted in food immunotherapy, and the results suggest that the treatment could potentially protect peanut-allergic children from severe reactions due to accidental exposures, which would be life-changing for families. We are excited to be able to conduct research that could one day lead to new treatment options that improve the lives of families dealing with peanut allergies.” 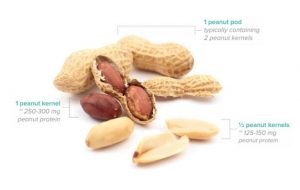 The bad news was that in participants 18 to 55 years of age the therapeutic effect was not significant.

So, we now have one on the board, an OIT protocol that will surely be offered much more widely than the “OIT underground” that has been treating patients for years. They will have to make the choice to perform, or at least authorize, more food challenges. As Dr. Andrew Bird (one of the co-authors) wrote on this website, the age of prescription food allergy treatment demands more rigorous diagnosis. They also must impress on patients and families that this is not a cure, but will require long-term maintenance and vigilance. And while it raises the threshold for eliciting a reaction, it doesn’t remove it altogether.

Another therapy, the DVB peanut patch is on its way.

This was the first of several chats I had with Dr. Peter K. Smith, whose "False Alarm … END_OF_DOCUMENT_TOKEN_TO_BE_REPLACED

This was the first of several chats I had with Dr. Peter K. Smith, whose "False Alarm … END_OF_DOCUMENT_TOKEN_TO_BE_REPLACED