Just over a year ago, we published an account of a fourth grader’s death from asthma. Teachers at the school were well acquainted with the drill for food allergies but missed signs that the child’s asthma was uncontrolled with tragic results. The child fell ill at home for the weekend.

Fast forward a year. The school has a special curriculum for all the kindergarteners throughout the school year. They are bussed to one of New York City’s ocean beaches where they study the tides, collect shells, and otherwise acquaint themselves with the power and beauty of nature. For most of the year the water is too cold for anyone to take a chance on getting wet, which makes the teachers’ task easier than it would be during the summer.

Children are not supposed to carry their own snacks on these trips, but these were five-year olds and mistakes are made. One child  had a piece of candy and offered a taste to the one kid in the class with a peanut allergy. He began to react. After years of preparation, the teacher swung into action and administered the EpiPen, then called 911. While she waited for EMS to arrive, she called the school where a take-charge assistant principal talked to her and reminded her that Department of Education policy was to take the child to the hospital for observation.

The epi had the desired effect and the little boy returned to normal, wondering why he had to abandon his friends and go off to the emergency room. An ambulance and a firetruck showed up at the beach, which must have been quite a spectacle for the other students. The teacher arranged with the remaining teachers and parents to cover the class while she accompanied her student to the hospital.

The same night, the assistant principal sent an email to the other parents giving a full account of the event.

Feeling a little delicate the next morning the boy stayed home from school, but the staff addressed the two kindergartens about what had happened. The students all knew about food allergies. They all knew that it was against the rules to take their own snacks and they particularly knew that it was forbidden to offer anything to their classmates.

The only student who had a bit of trouble with the message was the one who shared the candy, claiming to have been taught to share with friends, and so was caught between two conflicting lessons. 99.999% of the time there would have been no problem, but this time there was. We can only hope that these generous impulses will survive this near tragedy but that the health concern will take precedence.

The mother thanked the school by email the next day. “This is the one thing I’m so afraid of when my little boy isn’t with me!  All is much appreciated!  He is better & wishes he could have been in school today!”

As for the asthma tragedy, the school followed through fully on its early resolve to achieve asthma 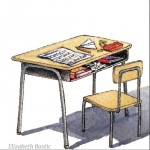 literacy. The physical education/health teacher was charged with compiling a program for faculty and staff, complete with extensive Power Point illustrating each element in full color with all the rules as well as the symptoms and underlying physiology. Oh, and the one thing that has been drilled into everyone is to watch for inhaler use. Every time that albuterol comes out, the child is sent to the nurse for examination and a call to the parents.

You've heard from a patient. Now you will hear from a doctor. Topical Steroid Withdrawal, … END_OF_DOCUMENT_TOKEN_TO_BE_REPLACED

By Paul Ehrlich, MD The title above is from an excellent article in The Atlantic by … END_OF_DOCUMENT_TOKEN_TO_BE_REPLACED

By Dr. Paul Ehrlich and Henry Ehrlich We were saddened to read that our co-author … END_OF_DOCUMENT_TOKEN_TO_BE_REPLACED