Now a new horse is entering the race—Oral Mucosal Immunotherapy (OMIT), which, like SLIT, has an evocative word as an acronym. One version of OMIT, for respiratory allergies, goes by the brand name Allerdent, suggesting how this new product is introduced to the body in a familiar way—in the form of toothpaste. It is the brainchild of William R. Reisacher, MD, FACS, FAAOA Associate Professor, Department of Otolaryngology–Head and Neck Surgery, Weill Cornell Medical College/New York-Presbyterian Hospital. The idea is a happy juncture of physiology and human behavior. 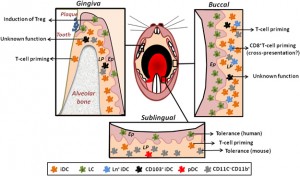 meat-and-potatoes offering of allergy shots more expensive to the practice and to patients, and early case studies testing the efficacy of OMIT for allergic rhinitis, described in an article by Reisacher and two co-authors, are very encouraging.1 They cite a 2013 World Allergy Organization position paper touting the potential of the mucosal tissue of the oral vestibule and gingiva for enhancing immunotherapy based on the density of oral Langerhans cells (oLC). In my quick and inevitably superficial scan of the literature. I saw these cells described as the “masters of tolerance”2 and as the “sentinels” of the mucosa. They “alter… the immune system not only to pathogen entry but also of tolerance to self antigen and commensal microbes. Oral mucosal Langerhans cells are capable of engaging and internalizing a wide variety of pathogens.”3

Most of the articles I looked at discuss these cells in conjunction with SLIT. However, Reisacher et al suggest that the high density in cheek and gums compared to the low density under the tongue “might explain the suggested decrease in efficacy when multiple antigens are placed in a SLIT vial.”

As for the behavioral part of the equation, almost all of us brush our teeth, including our small children. Compliance being a problem with all the new allergy therapies, including SLIT, OIT, and Chinese herbal medicine, suggests that combining the task of dosing with something you have to do anyway would be an advantage. I learned about this a long time ago when I worked for a bank at the dawn of the automated teller machine. They learned that customers who liked using a teller wouldn’t be coerced into using an ATM. It was only when ATMs started showing up in convenience stores, gas stations, and supermarkets that people realized they could eliminate special trips to the bank and save time. The long-term compliance issues with SLIT and SCIT are well studied, and as Larry has written, completion rates are abysmal.

Allovate Therapeutics, a New York City-based start-up company, is developing Allerdent, a platform for respiratory allergies. A second New York company, Intrommune Therapeutics, is developing OMIT for food allergies. OMIT is only one of Dr. Reisacher’s many ideas. Another one under development is a novel diagnostic that works by sampling epithelial cells from the mouth and nasal turbinates. Immunovent is developing this test, which goes by the name LAMB-Dx.

I was introduced to the company by Danya Glabau, who came on as as Director of Medical Affairs in June 2015 while writing a doctoral thesis on the patient experience of food allergies and food allergy activism. After being in close contact throughout her research, she invited me to meet two of her new colleagues over lunch, Erick Berglund, Allovate’s Chief Executive Officer, and PhD in biochemistry, who has extensive background in research, and Michael Nelson, Chief Financial Officer, who is also a lawyer. (Full disclosure: they paid for the meal.)

Being unfamiliar with the development of a new technology at this stage and the building of a new company, I decided to reach out to them and ask a couple of questions geared to their specific roles in the new company. I hope at some point to follow up with Dr. Reisacher.

Thanks, gentlemen, for taking some time with our readers.

AAC: You mentioned over lunch that Allovate is a “virtual” company, which I inferred means not integrated vertically or horizontally, so you must collaborate with others to do a lot of the work. Can you describe what you meant in a bit of detail, how you choose your collaborators, and the kinds of tasks that they do?

Erick: As a start-up company in a city with very high real estate expenses, we’ve built a lean, smart, flexible core team who work together daily in our Harlem office. They cover the essentials of running the company. We also work with a number of allergy researchers and experts in areas like the law, accounting, and manufacturing. They help us plan and carry out longer-term projects. Ultimately, the benefits of being in the vibrant, rapidly expanding biotech community in New York – the networking, the proximity to smart people in the city’s multiple medical schools – outweighs the challenge of finding the right office space.

AAC: Can you describe the funding and regulatory challenges that lie ahead?

Michael: Biotechnology has always been a high risk, high reward field. It has paid off in many high-need areas, like cancer immunotherapy. Allergy immunotherapy is just getting started as a major part of the biotechnology sector. At Allovate, our early study data and the robust knowledge that scientists already have about allergy immunotherapy makes Allerdent less risky than many new technologies out there.

The situation is a little bit different with food allergies. Treating food allergies is very delicate because of the risk of anaphylaxis. Regulators, doctors, and patients all expect – and deserve – a high level of safety. Companies that do research in the area put many layers of safeguards in place to protect current and future users, from optimizing the dose, to making sure the length, number, and size of studies tell the company and the FDA everything there is to know about a new treatment, to planning extensive physician education on how to safely use the product.

AAC: The cases in Dr. Reisacher’s article in the International Journal of Pharmaceutical Compounding are about allergic rhinitis, and Allerdent seems to be very effective. However, many of our readers are also food allergy parents, and they are interested in the prospects for that. Can you describe any of the special challenges for moving into food?

Erick: Allovate is licensing the OMIT technology to Intrommune Therapeutics, a separate company, to develop the OMIT platform for FDA-approved food allergy treatments. As food allergy parents know, food allergies are a complicated disease that needs to be managed very carefully. Intrommune has assembled a team of staff and advisors with deep clinical research experience with food allergy. They will be developing several safe and effective products for food allergies.

The safety piece is really important, since food allergy is a complicated condition that can be very serious and disproportionately affects children. Intrommune is designing the best studies possible to ensure not only that the technology works, but that it works without causing additional stress due to side effects, something that has been seen in research on other food allergy immunotherapy technologies. The company’s current plan is to start clinical trials in late 2016 in the US and to have OMIT FDA approved and widely available for food allergies starting in 2020.

AAC: Two new forms of food allergy immunotherapy, Viaskin™ and ARA101™, seem to be moving very rapidly. I can understand that the regulators are anxious to green-light new therapies since there is no conventional treatment and the therapeutic agents are familiar. Do you sense that this is a favorable environment to pursue the OMIT platform?

Michael: There is a huge unmet need for treatments for food allergies – 15 million people in the US alone could benefit from safe, effective new options. We get feedback all the time from researchers and food allergy parents about the clear potential they see for OMIT to make a difference in the lives of millions.

There are a number of other companies developing new treatments in the food allergy space, and everyone is working hard to get to the day when food allergies become a treatable condition. Recently completed research has helped to clarify some best practices for studies in the field. Everyone is hoping this will smooth the way to making new, FDA-approved treatments widely available.

The need is there, the interest is there, and the science is now coming along as well. We’re excited that Intrommune Therapeutics is developing our OMIT technology for the treatment of food allergy. We hope to see OMIT become a big player in this area.

You've heard from a patient. Now you will hear from a doctor. Topical Steroid Withdrawal, … END_OF_DOCUMENT_TOKEN_TO_BE_REPLACED

By Paul Ehrlich, MD The title above is from an excellent article in The Atlantic by … END_OF_DOCUMENT_TOKEN_TO_BE_REPLACED

By Dr. Paul Ehrlich and Henry Ehrlich We were saddened to read that our co-author … END_OF_DOCUMENT_TOKEN_TO_BE_REPLACED