Penicillin was discovered by Alexander Fleming in England in 1928 and by the 1940s it had achieved its deserved status as a wonder drug. US government laboratories perfected safe mass production in time to play a critical role in the successful prosecution by the Allied armies in World War II. But after millions of doses, the first case of anaphylaxis was reported in 1944 as we are told in an epic new paper in the New England Journal of Medicine by Mariana Castells, MD and PhD, and her co-authors David A. Khan, MD, and Elizabeth J. Phillips, MD.

This expert analysis has particular meaning for me. I was born in 1944. Five years later as I was preparing for my birthday party, which my cousin Henry attended in utero, I came down with something and my father, Leonard Ehrlich, a pediatrician, gave me a shot of penicillin. I broke out in a rash at which point Dr. Lenny, as he was known to generations of patients, pronounced me allergic.

Fast forward 20 years. I was a medical student at NYU and saw a flyer for a study of penicillin safety, with a hundred dollar participation fee. A hundred bucks was a hundred bucks and I already had mouths to feed so I went along. When I saw that an injection was involved and balked the physician in charge, Dr. Bernard Levine, said, “this is a hospital. If anything happens we’ll take care of you.” So I got the shot, nothing happened, and a crisp hundred was laid in my greedy hand. And my data presumably contributed to Dr. Levine’s discoveries in penicillin allergy diagnosis. 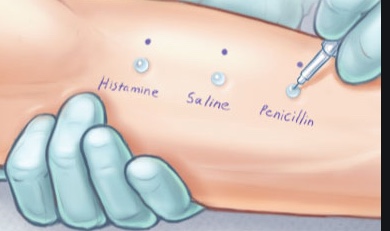 Dr. Castells and her colleagues tell us that the dangers of penicillin allergy are real, although quite rare, especially for oral dosing. One UK study found “one case of fatal anaphylaxis from oral amoxicillin in 35 years and 100 million treatment courses.” However, the drugs that are used in place of penicillin preparations are not as effective and more dangerous in some instances, as well as more expensive.

The incidence of both IgE-mediated and non–IgE-mediated reactions has not increased worldwide in the past 50 years, and a penicillin-allergy label has serious consequences for both individual and public health (Figure 4). Although a large number of patients are labeled as having penicillin allergy, more than 95% of them can safely receive penicillin when they are appropriately and safely evaluated. Penicillin allergy is lost over time, and using sensitive and specific tools to identify patients with true reactions should be a health priority implemented through delabeling algorithms and programs. Over time, it would be expected that delabeling patients who no longer have penicillin allergy will control the use of alternative and more expensive antibiotics and reduce the associated morbidity and mortality and the surge of organisms that are resistant to penicillin and beta-lactams. Protection of patients who are truly allergic to penicillin by means of accurate diagnosis, proper labeling, and if necessary, desensitization should be the next steps toward improved safety and quality of care in personalized medicine. Allergists should have a central role in facilitating outpatient and inpatient testing programs aimed at correctly identifying patients with penicillin allergy. Through appropriate history taking and risk stratification to identify patients without IgE-mediated allergy, as well as low-risk patients, all health care providers can play a central role in alleviating the enormous individual and public health burden related to the penicillin-allergy label.

Mom told you that you had a rash after penicillin when you were little? Maybe it’s time to revisit.

Testing graphic from WBUR.org. To see their take on the same story click here.

This was the first of several chats I had with Dr. Peter K. Smith, whose "False Alarm … END_OF_DOCUMENT_TOKEN_TO_BE_REPLACED

This was the first of several chats I had with Dr. Peter K. Smith, whose "False Alarm … END_OF_DOCUMENT_TOKEN_TO_BE_REPLACED