When IgE was discovered more than half a century ago, allergists had hopes that it would be the key to better diagnosis and treatment of allergies, but it has remained a riddle wrapped in an enigma, although there has been exciting research along the way. A new paper entitled “High-affinity allergen-specific human antibodies from single IgE B cell transcriptomes” by Stanford researchers Derek Croote, Spyros Darmanis, Kari R. Nadeau, and Stephen R. Quake has provided an exciting new glimpse of IgE’s nature that may lead to breakthroughs. We reached out to lead author Derek Croote of the Department of Bioengineering, who had recently followed us on Twitter. (Confession: another article by Hannah J. Gould and Faruk Ramadani was published in the same issue and as Derek suggested I used it as a cheat sheet for understanding the basic science.) – Henry Ehrlich

AAC: Thanks very much for taking time with our readers. Before we discuss the science in your paper, I’d like to ask you a few “process” questions. Can you tell us how you came to do this work? I’ve found that personal experience is the impetus for some researchers, either their own or a family member. Do you have a personal interest in food allergies or was it pure scientific curiosity?

Derek: This work began roughly three years ago actually. Professor Stephen Quake has always pursued clinically-relevant projects and at the time, techniques for studying single cells were maturing in the lab. These two factors, combined with Dr. Kari Nadeau’s clinical expertise and my interest in food allergies paved the way for our idea to study the rare B cells that produce IgE antibodies responsible for food allergies. I think my personal motivation also likely played a part–I have a severe milk allergy myself.

AAC: Would you give our readers some insight into how you think? What were the factors that led you to your hypothesis for this study? What previous research provided the building blocks?

Derek: From studies of humans and mice dating back decades, it has been known that B cells produce antibodies and that a specific class of antibodies, IgE, causes allergic reactions through interactions with other immune cells such as mast cells and basophils. However, studying the B cells that produce IgE antibodies has been a longstanding challenge due to their scarcity. By our estimates, B cells producing IgE antibodies can be as rare as one in ten million white blood cells! We thought that a new technique, called single cell RNA-sequencing, could allow us to capture these rare cells and study their antibodies.

AAC: This an extraordinarily rich paper—meaning there’s an awful lot I don’t understand—so I’m just going to focus on a few areas. B cells come in multiple subtypes including naïve and memory, which do not secrete antibodies, as well as plasmablasts and plasma cells, which do. As described in the Gould article, the IgE plasmablasts you discovered seem to learn their allergen specificity from other cells—on the job as it were, instead of at the factory. This gives them an advantage because they can go right to work pumping out new IgE when challenged. This is a good thing when there’s an infestation of helminths, which require a heavy-duty response. But it’s a problem when the target is a harmless allergen because it causes a reaction disproportionate to the threat. Am I correct in my description? Could you elaborate?

Derek: There are multiple interesting points there to unpack. In contrast to other antibody classes, such as IgM or IgG, most of the IgE B cells we found were plasmablasts, meaning- as you said- they were actively secreting IgE antibodies, many of them peanut-specific, into the blood when we isolated them. This is interesting because it suggests a bias in the fate of IgE B cells towards antibody-secreting plasmablasts. The question of where these IgE plasmablasts came from is more challenging to answer because we only have a single time point from each of the individuals in our study, but a large amount of research in mice and some in humans suggests that other antibody classes have a role in allergic “memory.” I think the method we developed using single cell RNA sequencing will help further answer these types of questions in humans going forward.

AAC: I think the most interesting thing about your paper is that it begins to explain how tendencies to specific allergens are inherited. You isolated identical gene sequences – converged sequences — from two unrelated patients with peanut allergens. I know that sickle-cell anemia started out as a defense against malaria, but it’s a disaster in those who have inherited the genes. Do food allergies have a parallel history? Does this mean that all these people (and millions more peanut-allergic patients) are somehow descended from some group that needed defenses against particular parasites, and that they are just waiting for a fight? Can we also infer that if you studied, say, milk allergies you would find a comparable set of convergent gene sequences? 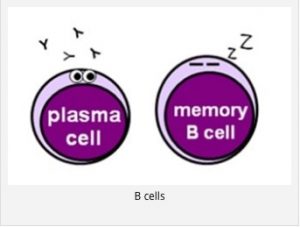 Derek: We did find one instance of convergent evolution where two unrelated individuals produced antibodies derived from identical gene rearrangements, but unfortunately we cannot say more on the general importance of specific immunoglobulin genes in allergies because of the limited number of individuals in our study. Broader claims about genetics, inheritance, and the importance of specific genes will require further studies with more individuals and more allergen-specific antibodies.

AAC: You state that the different allergenic peanut proteins most associated with anaphylaxis—Ara h 1, 2, and 3—are very different from one another. Why do these generate a stronger immune response than other peanut proteins and how do they relate to the IgE antibodies you found?

Derek: How the immune system decides which proteins in foods are “harmful” is still poorly understood, but some proteins, such as Ara h 2, are clearly more allergenic than others. One surprising result of our work was that some IgE antibodies we found bind strongly to two distinct allergens- Ara h 2 and Ara h 3. When we dissected the features of these antibodies that gave them this ability to “cross-react,” we found that it was a result of affinity maturation, a process during which mutations to the antibody sequence give antibodies the ability to bind more strongly to a target. We think this molecular approach will prove useful going forward when studying other allergies, such as tree nut allergies, where individuals can be allergic to some tree nuts but not others.

AAC: This question of a particular food allergy being descended from an ancient defense mechanism does beg the question why don’t all people with that gene sequence become food allergic? Many more millions of people who have these sequences don’t present as allergic, so far at least. Here I’m going to draw on your co-author Dr. Kari Nadeau and her work on epigenetics—namely the science of how genes are expressed—which can be influenced by many environmental and societal factors. Could you tell us some of the latest thinking about the food allergy epidemic from the epigenetic standpoint? Is it just a matter of time and generations before more trends in diet, pollution, and behavior uncover the food allergies in us all?

Derek: Food allergies are increasing in prevalence at a rate that cannot be purely explained by genetics, and indeed, Dr. Kari Nadeau here at Stanford and others around the world are finding that the types and timing of environmental exposures play a key role in determining if and when allergies develop. While some trends are certainly worrying, I would say that there are numerous recent advances that are encouraging. For example, it appears that early childhood exposure to food allergens can be protective. Going forward I think this will be a major focus of clinicians as they seek to develop interventions to reduce the incidence all types of allergic disease.

AAC: Finally, let’s talk about hope for the future. IgG4 is a class of antibody that greatly increases in individuals undergoing immunotherapy and is believed to act as a “shield” to prevent the immune system from reacting to an allergen. In one individual, you found a B cell producing a peanut-specific IgG4 antibody and a separate B cell producing a peanut-specific IgE antibody. Could you, for example, “selectively breed” cells to produce more IgG4 rather than IgE or administer peanut-specific IgG4 to accelerate immunotherapy? And if I’m way off base, could you please explain why? What should we be thinking about?

Derek: I first want to be fully transparent and say that our study was focused on our basic understanding of allergies and a potential therapeutic is still far in the distance. That being said, IgG4 is an exciting future direction for the exact reasons you mentioned. For our work in particular, a potential therapeutic could be based on re-engineering our antibodies to retain their ability to bind peanut allergens, but modify them such that they belonged to the IgG4 antibody class. If these were then reintroduced into someone and that person accidentally consumed an allergen, these antibodies would ideally bind the peanut allergens and prevent the immune system from reacting to them.

AAC: Thanks for your time and your provocative research.

Derek: It was a pleasure, thank you.

Derek Croote is pursuing a Ph.D. in Bioengineering in the laboratory of Professor Stephen Quake at Stanford University. Broadly, his research interests include allergy, B cells, antibodies, genomics, and bioinformatics. His most recent research focuses on a fundamental understanding of the human immune system for translational applications in allergic disease. He is excited by today’s unprecedented capacity for generating biological data and can be followed on Twitter: @DerekCroote.

You've heard from a patient. Now you will hear from a doctor. Topical Steroid Withdrawal, … END_OF_DOCUMENT_TOKEN_TO_BE_REPLACED

By Paul Ehrlich, MD The title above is from an excellent article in The Atlantic by … END_OF_DOCUMENT_TOKEN_TO_BE_REPLACED

By Dr. Paul Ehrlich and Henry Ehrlich We were saddened to read that our co-author … END_OF_DOCUMENT_TOKEN_TO_BE_REPLACED