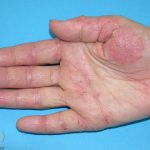 Any time the word “allergy” appears in NY Times headlines we feel compelled to comment. The front page of Saturday’s business section had this: “Growing Scrutiny for an Allergy Trigger Used in Personal Care Products.”

The preservative methylisothiazolinone, or MI, was honored by the American Contact Dermatitis Society in 2013 as allergen of the year (which we previously mentioned in this post). The Times article tells the story of a young mother whose hands “looked like I had been in a fire” several months after she started using Huggies Simply Clean wipes. European Scientific Committee on Consumer Safety said “that MI should be used only in limited quantities for rinse-off products, like soaps and shampoos, and that ‘no safe concentrations’ existed for leave-on products like lotions.”

Representatives of the industry express frustration with the challenge of finding preservatives to use in consumer products. MI was used to replace parabens, “esters” used in cosmetics, which are chemically close to estrogens. The regulatory Wonderland governing use of chemicals operates by the standard of “innocent until proven guilty.” I.e. something that is seemed safe for one use is presumed safe for another until we find out it isn’t. Thus, last year’s rust retardant in paint becomes next year’s sunscreen additive.

Something similar happens in other areas of medicine. A drug will be certified for use for one condition and as beneficial side effects begin to emerge, it will be used “off-label” for others, which may or may not be tested and approved for those. With other drugs, disturbing side effects will become manifest, sometimes in the trial phase, and sometimes only after they reach the open market, where users may go from, say, 10,000 to millions, prompting the appearance of black box warnings.

In allergies I can think of a couple of prominent examples. Years ago there was a third-generation antihistamine called terfenadine, which was marketed in the US under the brand name Seldane. It was really effective, except that in some patients it produced arrhythmia and rapid heartbeat and eventually killed a few patients if I recall correctly. Eventually it was “dumbed down” by chemists into something called fexofenadine, which was so wishy-washy therapeutically that it had to be amped up to six times the previous dosage to become the unexceptional antihistamine Allegra.

Another is montelukast—Singulair—which was hailed as effective for treating asthma as pain-in-the-neck inhaled steroids and bronchodilators but could be taken as a pill once a day. It threatened to turn every primary care doctor into an allergist. But, as we wrote in our book, the patients began trickling back. More recently it has been implicated in mood disorders such as “suicidal ideation.”

This ripple effect is something we have to live with. You start with a good idea for a few patients chosen carefully in trials, or a few applications like retarding rust on the hulls of ships as mentioned above, but skin is not steel.

As to the subject of MI and its effects on a mother’s delicate hands, I certainly know the convenience of wipes and I don’t have an alternative for busy parents changing babies on the run. It’s not comparable to the use of anti-bacterial soaps and lotions when good old soap and water followed by simple moisturizers work better.

For their part, the companies that have used this stuff seem to have been responsive, all things considered. Johnson & Johnson, Unilever, and Kimberly-Clark are all in the process of getting rid of it in their products. But who knows what the next thing will be?

This was the first of several chats I had with Dr. Peter K. Smith, whose "False Alarm … END_OF_DOCUMENT_TOKEN_TO_BE_REPLACED

This was the first of several chats I had with Dr. Peter K. Smith, whose "False Alarm … END_OF_DOCUMENT_TOKEN_TO_BE_REPLACED