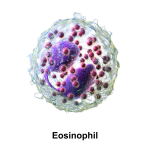 A few months ago I wrote about an approaching fleet of monoclonal antibodies (mAbs) that promise a new set of weapons in the fight against allergic disease. The best-known mAb for allergy patients is Xolair (omalizumab), known as the anti-IgE drug, which binds an extra epitope to IgE and keeps it from binding to mast cells. It is used to treat severe asthma, chronic urticaria, and in combination (experimentally) with oral immunotherapy for food allergies.

On June 11, 2015, the FDA Advisory Committee voted unanimously (14 yes, 0 no) that the efficacy and safety data for GlaxoSmithKline’s mepolizumab, which stops an interleukin, IL-5, from binding to its receptor on the surface of eosinophils, a type of white blood cell. Inhibiting this binding should have the effect of reducing blood, tissue, and sputum eosinophil levels. Phase 3 trials were completed in 2014.

Not all asthma is the same. Some asthmatics have high IgE levels, others have high eosinophils, white blood cells that are drawn to parts of the body that are chronically inflamed. In some elevated neutrophils, another kind of white blood cell, seem to play the causal role. Different asthma types will respond differently to different medications. Most of the talk about eosinophils these days concerns eosinophilic esophagitis. The primary evolutionary purpose of eosinophils is to attack invasive parasites, but like so much else in the realm of allergy, when there are no parasites to battle, they find inappropriate targets.  In the lungs they are a great diagnostic marker for allergic asthma, and collecting sputum and looking at under the microscope is taught as the ideal way of finding out what one is dealing with. In the real world, patients, especially kids, fight the idea of giving a sputum sample. As for those doing the collecting, medical personnel relish looking at sputum almost as much as looking at fecal material.

Frequent activation of eosinophils has long-term consequences as well as the immediate bronchoconstriction and excessive mucus production.  It contributes to thickening of the airway muscles and loss of flexibility that are called airway remodeling. But medical interventions for severe asthma have their own problems. Before the advent of inhaled corticosteroids, many older patients who required high dose systemic steroids for their eosinophilic asthma gained lots of weight, and now there are many who depend on systemic prednisone to breathe. Younger ones failed to hit their height markers. They and many others would have benefited from this new drug

My friend Dr. Joe Bellanti writes in his tome Immunology (fourth edition) that IL-5 was originally discovered as an “eosinophil colony-stimulating factor; it is a major regulator of eosinophil accumulation in tissues and can modulate eosinophil behavior from maturation to survival.”  It affects many immune cells, including Th2, B cells, and mast cells as well as eosinophils. Gumming up the binding of IL-5 would go a long way to controlling lung inflammation without relying on steroids, which are life-giving but have side effects.

According to reports, the safety profiles are similar for mepolizumab patients and those receiving standard of care. Adverse events include headache, nasopharyngitis, bronchitis, sinusitis, fatigue and asthma. Local injection site reactions during trials were normally transient and not considered severe.  No events of anaphylaxis were reported.

One big issue with all mAbs is their cost. These are highly engineered biologically active drugs. Mepolizumab will cost from $10,000-$20,000 annually.

Is it a silver bullet? No. Asthma is a set of symptoms that are activated via multiple pathways. For a start, there are other interleukins that play parts. Il-4 and Il-13 are big ones, and as I mentioned in my previous article Il-13 is in the gun sights of several other mAbs. Il-17 plays a role in asthma with neutrophils. Several other Il-5 mAbs are on the way from other manufacturers.

This was the first of several chats I had with Dr. Peter K. Smith, whose "False Alarm … END_OF_DOCUMENT_TOKEN_TO_BE_REPLACED

This was the first of several chats I had with Dr. Peter K. Smith, whose "False Alarm … END_OF_DOCUMENT_TOKEN_TO_BE_REPLACED