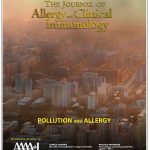 The new issue of the Journal of Allergy and Clinical Immunology has on its cover a photograph of a city with filthy air with the words “Pollution and Allergy.”

Several articles inside include one by South Korean MD and PhD Kangmo Ahn, on air pollution and atopic dermatitis, which hasn’t been studied a great deal, but:

“Recent evidence suggests that a variety of air pollutants, such as environmental tobacco smoke, volatile organic compounds, formaldehyde, toluene, nitrogen dioxide, and particulate matter, act as risk factors for the development or aggravation of AD. These air pollutants probably induce oxidative stress in the skin, leading to skin barrier dysfunction or immune dysregulation.”

A review article called “Environmental effects on immune responses in patients with atopy and asthma” is by MDs Rachel L. Miller of Columbia and David B. Peden of the University of North Carolina. It reads in part: “Despite attempts and some successes to improve air quality over the decades, current US national trends suggest that exposure to outdoor and indoor air pollution remains a significant risk factor for both the development of asthma and the triggering of asthma symptoms. Emerging science also suggests that environmental exposures during the prenatal period and early childhood years increase the risk of asthma. Multiple mechanisms mediate this risk because a wide range of deleterious air pollutants contribute to the pathogenesis of asthma across a variety of complex asthma phenotypes.”

A third by a multinational case of researchers called “Cost of near-roadway and regional air pollution–attributable childhood asthma in Los Angeles County” says: “Cost of air pollution–related asthma in Los Angeles County in 2007 was $441 million for O3 (ozone) and $202 million for NO2 (nitrogen dioxide) in 2010 dollars. Cost of routine care (care in absence of exacerbation) accounted for 18% of the combined NRP (near-roadway air pollution) and O3 cost and 39% of the combined NRP and NO2 cost; these costs were not recognized in previous analyses. NRP-attributable asthma accounted for 43% (O3) to 51% (NO2) of the total annual cost of exacerbations and routine care associated with pollution. Hypothetical scenarios showed that costs from increased NRP exposure might offset savings from reduced regional pollution.”

This website avoids politics for a number of reasons, but when it comes to air pollution and allergies, we do make exceptions. We had an article that called out Senator Rand Paul for denying a link between asthma and air pollution on the floor of the U.S Senate. Now his fellow Kentucky Senator Mitch McConnell is on the brink of becoming Senate Majority Leader and has the Environmental Protection Agency in his gun sights. {Note: Kentucky is the third-largest coal producing state.} Along comes JACI to remind us that the work of the EPA is not done, that our air still needs protecting. When the Clean Air Act was passed in 1970 and amended in 1990, it focused on pollutants from automobiles and power plants and accomplished a great deal.

But as Drs. Miller and Peden point out, the work isn’t done:

“Despite the strengthening of the Clean Air Act in 1990 and improvements in air quality, current US national trends suggest that exposure to outdoor and indoor air pollution remains a significant risk factor for both the development of asthma and the triggering of asthma symptoms.Based on data from the Children’s Health Study in Southern California, where exposure to traffic-related air pollution is relatively high, almost 40% of asthma exacerbations were attributable to exposure to air pollution. Within the New England, New Jersey, and New York area, which was studied in one public health effect analysis, 72% of the population lives in densely populated cities with increased ambient fine particulate matter (particulate matter of 2.5 ?m in diameter [PM2.5]) concentrations.”

Asthma costs the US alone $60-billion in direct medical costs, as well as lost time at school and work. The symptoms cut across class, racial, and ethnic lines. The World Health Organization estimates there are 300-million asthmatics worldwide.

Thanks to the editors of JACI for reminding us that the cleaning our air, indoors or outdoors, is a work in progress, not a fait accompli.

This was the first of several chats I had with Dr. Peter K. Smith, whose "False Alarm … END_OF_DOCUMENT_TOKEN_TO_BE_REPLACED

This was the first of several chats I had with Dr. Peter K. Smith, whose "False Alarm … END_OF_DOCUMENT_TOKEN_TO_BE_REPLACED