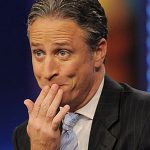 Some people think Jon Stewart is snotty. At last the Daily Show host owns it in a segment on seasonal allergies entitled “Along Came Pollen”. Going after mainstream coverage of the pollen season for its customary hyperbole, Stewart shows how each year gets its own label on the theme of worst allergy season ever. Only a funny thing happens. A guest appearance by friend of this website Mike Tringale of AAFA, who admits that he is not a scientist, makes the point that pollen levels are rising year by year. For those of you who are sneezing a lot this spring, like yours truly, this is worth a look.

You've heard from a patient. Now you will hear from a doctor. Topical Steroid Withdrawal, … END_OF_DOCUMENT_TOKEN_TO_BE_REPLACED

By Paul Ehrlich, MD The title above is from an excellent article in The Atlantic by … END_OF_DOCUMENT_TOKEN_TO_BE_REPLACED

By Dr. Paul Ehrlich and Henry Ehrlich We were saddened to read that our co-author … END_OF_DOCUMENT_TOKEN_TO_BE_REPLACED