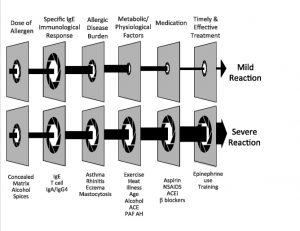 The graphic to the left popped up on Twitter during the recent annual conference of the American Academy of Allergy Asthma and Immunology (AAAAI) as part of a talk by London allergist Paul Turner, whom I met a year ago, so I emailed him. He had borrowed it from a 2015 piece that was written by Dr. Pete Smith, our friend, contributor, and originator of a novel theory of food allergy called the False Alarm Hypothesis, and two distinguished co-authors. This is a review article, which means it was assembled from disparate pertinent sources to explore a larger issue, and what could be larger than this? So I wrote to Pete and he agreed to answer some questions for us. — Henry Ehrlich

AAC: First, welcome back to our website, Pete. And thanks for discussing this most difficult subject. We have only published one piece about fatalities before, which made the point of how rare they are, but of course that doesn’t reassure those who are living with food allergies. Some of these risk factors are very familiar, such as uncontrolled asthma and delayed administration of epinephrine, so I’m going to address the less-familiar ones and the research process. The first thing I would like to know is how the different studies you looked at compiled their data. Was it through autopsies? Were there detailed inquests? It seems to me that part of this entails examining behavior before the event. How can this be done without asking questions of the friends and loved ones about prior eating and drinking habits?

Pete: Dr. Paul Turner to his very great credit, has really helped to put the risks of food allergy into context for families and the paper I co-wrote in 2015 is one of the references he used. He has full permission to use anything from my papers and I am delighted to hear that people are discussing this framework. Professor Jonathan Hourihane, Dr. Phil Lieberman, and I assembled the current information into a model that gives doctors and patients a structure to help consider risks and the factors to address when planning and assessing food allergy management beyond going over what to do when reactions happen. The more people discuss and find things out, the better this model can be.

As you indicate, Henry, death from anaphylaxis is rare, but there is an increasing body of evidence of co-factors emerging from the analysis of cases and also the analysis of severe non-fatal anaphylaxis episodes that helps us create a picture of variables that can make food allergy reactions more severe. As doctors, we are often frustrated about the lack of predictability of future severe food allergy and part of this is likely to be due to multiple cofactors. Because of this, as a clinician I make sure that a patient with food allergy has excellent control of their allergic co-morbidities and I do have conversations particularly with teenager-young adults about the risks of alcohol (not recognizing symptoms as they arise or responding to them) as well as a not carrying their epinephrine device. The model is flexible, lending itself to continual addition of new information. For example, a December 2016 publication of the finding that repetition of the alpha-tryptase gene results in elevated tryptase levels. This marker could be a risk factor for severe allergic reactions.

AAC: You mention “concealment.” This means factors that may mask exposure to an allergen until a reaction is advanced. They include a “lipid matrix” in a biscuit that contains peanut (I presume that slows down digestion and absorption). Another is spiciness producing itching and burning that could be confused with an allergic reaction. And then there is alcohol, which can impair all manner of sensations as well as judgement. (Alcohol can also influence absorption.) How do researchers isolate these factors after the fact? Is it all done post-mortem or does it arise from interviewing patients who have had close calls?

Pete: The concealment story came from a study Prof. Hourihane was doing in Southampton. They were making cookies for blind challenges and saw that when they increased the oil, the threshold dose changed. Spiciness is observational point of confusion in symptoms – things like chili hit TRPV1, the receptor associated with histamine release, so the tingle you might have from an allergy may be confused with the spiciness of the dish, you might consume more before you become aware of an allergic reaction occurring. No randomized trials have been done on this.

AAC: Prompt administration of epinephrine is a crucial category. You say that intramuscular injection is standard of care. I was particularly intrigued by the way you addressed the idea of alternative routes for administration, such as inhalation. Yet, drug companies continue to invest in things like inhalers and sub-lingual pills. We published a piece on a nasal inhaler that would, as Dr. Larry Chiaramonte contends, present a particular problem with a child with a nose full of mucus, a real risk with atopic kids. What should the message be to patients and caregivers about different modes of administration, and the doctors who should be training them?

Pete: I would stay within the lines – go with the best and proven treatment. IM epinephrine. “If in doubt use the epinephrine injector.” (WAO Journal)

As for stuffy noses, I agree – rhinitis could interfere with drug delivery. A nasal epinephrine spray may not go past the inferior turbinates if there is obstruction, which can result from a virus or severe allergic rhinitis. Whatever the cause, mucus and inflammation are risk multipliers.

AAC: You have an entry called “Past history of severe allergic reactions.”  In it you also point out that many fatalities occur in those who have previously experienced mild reactions. I am interested in this in conjunction with the persistent narrative that severity escalates with each successive reaction. What is the takeaway here? That it’s only going to get worse? What about those patients who have no reaction history? Should they be discouraged from having controlled food challenges because a reaction will light a fuse that they can’t put out?

Pete: Food challenges are useful, but not without risk, as a recent fatality in the US showed us. We don’t know the full story, but we hopefully will have more details available in coming months. The whole idea of the challenge is to work out safety of a food and also not to avoid foods when you do not need to. The SPT size and or RAST levels or specific component testing like AraH2 in peanut allergy helps to provide likelihood of a challenge being passed. The escalation with each reaction is incorrect. This often haunts patients. Many food allergy reactions reduce over time; patients are more careful not to give the food intentionally (so they are less likely to consume the previous eliciting dose) and they will be more likely to have medications and a plan to treat reactions earlier.

AAC: You mention oral immunotherapy (OIT) research a couple of times, once in conjunction with history of reactions and once in conjunction with reaction rates during illness. Most interest in OIT involves its potential as a treatment, but clearly if also provides a window into the nature of anaphylaxis. How much are you learning from it? Is it being studied explicitly or is the data being collected by re-crunching numbers from the primary research? Finally, does any data come from private OIT practice—I know that it isn’t being done in Australia but there’s lots in the US.

Pete: The OIT literature is very brief. I think most specialists are not dabbling in OIT in Australia. Allergic reactions are a recognized “side-effect” and may not be reported with OIT. I believe that our papers framework will help doctors consider when to do any type of immunotherapy, and when not to dose escalate. Based on data coming out – and studies in progress – I expect more food OIT will be done.

AAC: I’d like to switch to the subject of how information is promulgated after publication. Your paper is now three years old and, obviously, it has a life because Paul Turner cited it and I got in touch with you. Do you have a feel for how your paper may being used? Has anyone written a guidance for allergists to use this information to take better histories as part of diagnosis or in the aftermath of reactions to help guide future behavior?

Pete: Good questions. This is available at the WAO site – open access. It has been cited 23 times, it has been accessed over 10K times – making it one of the highest impact papers tracked (about 10-year history) for the journal. I like the thought that it is helping people think about a complicated condition and manage it several years after publication.

Dr. Pete Smith is a Professor in Clinical Medicine at Griffith University in Queensland Australia. He trained in Pediatrics and did his PhD in molecular immunology at Flinders University South Australia and has worked as a Senior Lecturer at the Institute of Child Health London and an Honorary Consultant in Allergy at Great Ormond St Hospital London. He consults in Clinical Medicine in Southport Queensland and is Medical Director of Allergy Medical Group in Brisbane and Sydney. Current research includes AGEs and allergy, molecular ion channels in hypersensitivity and allergy, molecular activation pathways in allergic rhinitis and clinical studies in food allergy and rhinitis.

Kelly Barta, who has previously appeared on this website, is a survivor of topical steroid … END_OF_DOCUMENT_TOKEN_TO_BE_REPLACED

By Paul Ehrlich, MD The title above is from an excellent article in The Atlantic by … END_OF_DOCUMENT_TOKEN_TO_BE_REPLACED

By Dr. Paul Ehrlich and Henry Ehrlich We were saddened to read that our co-author … END_OF_DOCUMENT_TOKEN_TO_BE_REPLACED