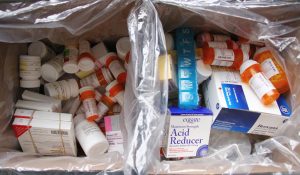 Who hasn’t rummaged through a medicine cabinet in the middle of the night looking for relief, only to spy an expiration date long past and wondered if relief might be worse than the disease? We recently featured an article by scientist and food allergy mom Elizabeth Muller on how she copes with her backlog of expired EpiPens. Clearly some people aren’t too daunted by the calendar.

Now a report on the investigative website ProPublica tackles expiration dates and what they mean for the nation’s health care bill. One of the problems is that dutiful adherence by drug stores and hospitals to the disposal rules has deprived us of specimens to be tested. By chance, a stash in the back of a retail pharmacy turned up a mother lode of drugs from before 1969. “Overall, the bottles contained 14 different compounds, including antihistamines, pain relievers and stimulants. All the drugs tested were in their original sealed containers. The findings surprised both researchers: A dozen of the 14 compounds were still as potent as they were when they were manufactured, some at almost 100 percent of their labeled concentrations.”

The article is full of pithy information. For example, that the US military hangs onto large amounts of expired drugs and saves millions of dollars with no ill-effects. In 1986 at the impetus of the Air Force, the FDA and Defense Department began studying the potential for extending shelf life. They studied 122 drugs found that two-thirds of the expired medications were stable every time a lot was tested. Expiration dates were extended, on average, by more than four years.

Of particular interest to our readers: albuterol doesn’t have a long shelf life.

How much of a difference does it make? “An official with the Department of Defense, which maintains about $13.6 billion worth of drugs in its stockpile, says that in 2016 it cost $3.1 million to run the extension program, but it saved the department from replacing $2.1 billion in expired drugs. To put the magnitude of that return on investment into everyday terms: It’s like spending a dollar to save $677.”

As the late Senator Everett Dirksen used to say, “A billion here and a billion there and pretty soon you’re talking about real money.”

Kelly Barta, who has previously appeared on this website, is a survivor of topical steroid … END_OF_DOCUMENT_TOKEN_TO_BE_REPLACED

By Paul Ehrlich, MD The title above is from an excellent article in The Atlantic by … END_OF_DOCUMENT_TOKEN_TO_BE_REPLACED

By Dr. Paul Ehrlich and Henry Ehrlich We were saddened to read that our co-author … END_OF_DOCUMENT_TOKEN_TO_BE_REPLACED