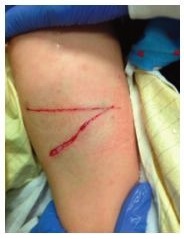 Hospital and is the lead author of a new study of EpiPen™ injuries published in the Annals of Emergency Medicine. It documents the stories of children who suffered lacerations during the administration of EpiPen™ and recommends changes both in the design of the autoinjector and procedures for using it. Her inquiry began when a four-year old boy came into the ED with two large lacerations after daycare providers used an EpiPen Jr™ device. The child was having an allergic reaction at daycare. He was restrained from behind by one daycare staff member while a second help his leg from in front with one hand and inject his thigh with the other. The boy kicked during the insertion, cutting his leg and expelling the needle. The needle bent, preventing the needle cover from locking into place. The daycare worker’s instinct was to reinsert the needle in order to complete the recommended 10-second injection time. When this was done, the child moved again, causing a second cut.

Thus began Dr. Brown’s preoccupation with how this life-saving medicine, administered through an well-established and presumably reliable mechanism, could inflict such damage to a child.

She told me, “I didn’t understand how that could have happened to him. I realized I didn’t really understand how EpiPens worked. I asked a colleague who has a child with food allergies if I could have an expired one. I fired it off in a light box with the camera running. I was so surprised to see a) that the needle stayed out until I let go of the needle cover, which meant that it would be in the thigh for the full 10 second count and b) that the drug was expelled from the needle tip in less than a second. I was baffled. If the drug was injected so fast, why is the user instructed to hold it in place for 10 seconds? So I started investigating. From there, I learned about the history of auto-injectors, leading up to the development of the EpiPen™ device.”

Closely reading the instructions from start to finish, she found nothing that talked about patient restraint, not even in Jr. formulation. She says, “I thought I should warn my colleagues that these instructions were lacking, so they could talk about restraint with their patients, and avoid similar injuries. I sent an email to the other emergency providers in my group, and was very surprised when one of my colleagues replied that she had treated a patient with a similar laceration. That is when I knew this had to be a bigger problem than previously reported.”

Reaching out to other doctors via email and parents via social media, Dr. Brown asked about lacerations or stuck needles from any epinephrine autoinjector device and identified 25 patients in all, all injuries due to EpiPen™ or EpiPen Jr™. Twenty of these were children who suffered thigh lacerations. Four needles were stuck under the skin, one during unintentional use, and one during use in the incorrect location (deltoid). One nurse suffered a digit laceration.

In the article, Dr. Brown and colleagues note that evidence suggests that the epinephrine is expelled from the EpiPen™ quickly. First of all, the makers of Auvi-Q™ had to show their product was comparable to an existing device, and in their FDA documents it shows that the duration of injection ranged from 0.17 to 0.3 seconds. Secondly, in a paper called “The TEN study”, the authors showed that as much epi was injected into a slab of “marbleized beef” at 1 second as at 10 seconds.

Dr. Brown has now published numerous YouTube videos of Epipen™ devices firing. She has also investigated the newer Auvi-Q™ (and its Canadian counterpart Allerject™), which has a self-retracting needle. The medication also fires out of this device in less than a second. But the difference is that the needle itself retracts into the device and is gone in less than two seconds. Even though the device counts to 5, there is no risk of needle-related injury after two seconds. Dr. Brown believes that this may offer significant safety advantages for use in young children. “Given that the needle is gone so quickly, it seems likely that there will be less opportunity for needle-associated injuries such as lacerations and stuck needles to occur. It is notable that there were no injuries due to Auvi-Q™ or Allerject™ devices, even in recent years.”

You can view some of Dr. Brown’s videos here:

Dr. Brown and her colleagues concluded that there are some deficiencies in the design, in the instructions, and that administration is widely variable. They recommend five changes, including instructions for immobilizing the child, the motion employed to deliver the injection, how long the needle is held in place, the strength of the needle, and finally, “The needle should never be reinserted.”

This is an important article and I hope it provokes widespread debate and above all, action. We all acknowledge that epinephrine is our friend. It has saved thousands of lives. But while a trip to the ED is standard after any use of an autoinjector to monitor the reaction, doctors, nurses and certainly families would prefer to concentrate on that, and not face the additional challenge of also needing to treat an autoinjector-associated injury.

“There are steps families can take to avoid these injuries.  Families using devices without self-retracting needles (EpiPen and generic devices) should be aware of the risk of needle-related injuries throughout the 10-second hold period, and should securely restrain their children throughout that time.  Families using the Auvi-Q (and in Canada Allerject) devices still need to restrain their children well for at least the first few seconds of injection (the needle retracts within 2 seconds of the 5-second count).  All families using epinephrine auto-injectors should consider and practice how they will hold their child while injecting their device.

“Epinephrine autoinjectors are used safely and save lives every day.  While the devices and their instructions can be improved, it would be tragic if a family didn’t use epinephrine when needed because of a concern for injury.  Nothing matters more than saving a life.  For the best outcomes, epinephrine needs to be given early in the course of anaphylaxis, without hesitation.  Epi first, epi fast!”

Julie Brown is an Associate Professor in the Department of Pediatrics at the University of Washington School of Medicine and is co-Director of research for the Division of Emergency Medicine. She is board certified in Pediatrics and Pediatric Emergency Medicine and works in the Seattle Children’s Hospital Emergency Department. She is Canadian but has crisscrossed the border many times over the years: she received her undergraduate degree from Stanford University, her medical degree from McGill University and her MPH from the University of Washington. She was a pediatrics resident first at Rainbow Babies and Children’s Hospital in Cleveland and then at Seattle Children’s Hospital, where she also completed her pediatric emergency medicine fellowship training. Her research interests include anaphylaxis, foreign bodies, minor procedures, and the emergency management of respiratory diseases. When there is time after making up for her sometimes neglect of her husband and two teenage boys, she enjoys gardening, sewing costumes, genealogy, and evening walks.

You've heard from a patient. Now you will hear from a doctor. Topical Steroid Withdrawal, … END_OF_DOCUMENT_TOKEN_TO_BE_REPLACED

By Paul Ehrlich, MD The title above is from an excellent article in The Atlantic by … END_OF_DOCUMENT_TOKEN_TO_BE_REPLACED

By Dr. Paul Ehrlich and Henry Ehrlich We were saddened to read that our co-author … END_OF_DOCUMENT_TOKEN_TO_BE_REPLACED