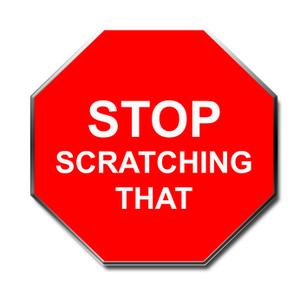 In our book we devote a chapter to skin allergies—eczema, hives and contact dermatitis. From the point of view of a pediatric allergist, the one that means most and the worst is eczema, which is often the earliest sign that a child is on his or her way to a lifetime of escalating allergies. We refer to it as “the itch that rashes” because children start to scratch themselves they get a rash. If only it were easy for a child to obey his parents when they say those useless words, “stop scratching or you’ll make it worse.”

That’s why I was so pleased to read about a new study that may explain why eczema happens. As reported by Science Daily, “In eczema, immune T cells invade the skin and secrete factors that drive an allergic response, making the skin itch. Dr. Raif Geha, of Boston Children’s Hospital, and his collaborators now show that scratching the skin precipitates the condition by encouraging an influx of other immune cells called neutrophils. These neutrophils secrete a lipid called leukotriene B4 that calls in more neutrophils, and more importantly, potent immune T cells that are the hallmark of eczema. These cells cause inflammation that aggravates the skin further. The investigators suspected that blocking the onslaught of these cells might slow down the disease or even stop it in its tracks.”

In a mouse study, a drug that blocked the production of leukotriene B4 stopped the development of skin inflammation.

For the first century of allergic medicine we have depended on avoidance and flexible control of symptoms. Now we can look deeply into the mechanisms that actually precipitate these conditions. In the short run we have no alternative to the current approach—clean, dust-mite proof bedding, better infant nutrition, topical steroids, “bleach baths” and “wet PJs.”

But tomorrow? We may be able to stop the allergic chain of events before it gets out of hand.

You've heard from a patient. Now you will hear from a doctor. Topical Steroid Withdrawal, … END_OF_DOCUMENT_TOKEN_TO_BE_REPLACED

By Paul Ehrlich, MD The title above is from an excellent article in The Atlantic by … END_OF_DOCUMENT_TOKEN_TO_BE_REPLACED

By Dr. Paul Ehrlich and Henry Ehrlich We were saddened to read that our co-author … END_OF_DOCUMENT_TOKEN_TO_BE_REPLACED