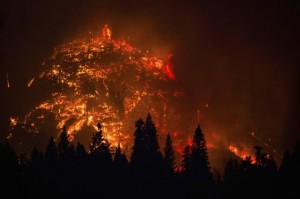 (Reno, Nevada) Smoke reached out from the fire on the Yosemite rim and grabbed my community in the Reno/Spark and Lake Tahoe area by the throat. It hasn’t let go! Literally, our community is gasping for air.

Although Yosemite sits about 200 miles south of here, the smoke from devastating Rim Fire has darkened our skies, dropped fine ash onto our homes and cars and sent me running one day to get our pets indoors when the air quality rose to dangerous levels.  It has been so bad that our solar panels haven’t received enough sunlight to generate electricity for our house, and our electric bill was as bad as a winter month!

For weeks now, school children have not been allowed outside. Recess is held indoors and traveling to and from school is all the time they spend outside. Footballs, soccer balls and baseballs are gathering dust. Three weeks into soccer and there has only been one game played!

In the early days of the fire, our community focused on children like mine who have asthma. For once, everyone was concerned for folks in the USG category—short for Unhealthy for Sensitive Groups-people with heart or lung disease, older adults or small children. Yes, an entire community is now fluent in air quality. We run our lives on a scale from zero to 300; as the numbers rise, the less we do.

We all monitor AirNow.gov religiously and folks would text to each other almost hourly as Particle Pollution increased.

Friends are in continual touch by phone call, email and text hoping to hear good news. Thankfully, my children have faired incredibly well. To be honest, we have a leg up on the rest of my community since I have a closet full of asthma maintenance and rescue medications. I’m changing my HVAC filters like crazy and I run two heavy-duty HEPA filters day and night in my household. We were ready.

Unfortunately, an entire community has suffered. The general public has health problems never seen before on this scale.

I was in a store and a clerk who was helping me suddenly panicked over not being able to see the sun, which was just a red ball in the sky for days, and said he felt like he couldn’t breathe. He had to take a break and a co-worker assisted me instead.

I stopped into my local American Lung Association office, where I am a regular, and a staffer explained that she has had a headache for days on end and was struggling through her day. The smoke was making her feel ill and she had trouble doing her job.

A friend who works for a senior federal official called me and said she was feeling horrible and sick. She had just gone outside for about 20-30 minutes to pick up lunch for her colleagues and couldn’t believe how awful she felt. Friends report their chests feel heavy as they simply walk from their car to the grocery store or office.

An entire city is collectively ill.

News reports warn residents to stay indoors, use air conditioners, remain hydrated and no rigorous outside activity. The emotional impact is mounting.

Normally, I open up the blinds and look up at the Sierra Nevada Mountain Range and smile. Since the Rim fire began, I can only see my neighbor’s house. The mountains—seven minutes away–have disappeared.

Not being able to see our mountains on either side of valley, the sun and sky combined with the smoke is like having never-ending claustrophobia—complete with breath-robbing anxiety. Normally, clean air is something many of us take for granted. I’m a strong advocate for the American Lung Association since I understand the need for clean healthy air first hand from watching my children struggle to breathe. Now the whole community is learning the lesson together.

I had a break when I attended the Mylan Food Allergy Bloggers Summit in New York City recently. How’s that for role reversal? Leaving the wide open spaces of the great Southwest and visiting the big bad city for a breath of fresh air.

I was receiving regular updates from a friend who told me the emergency broadcast system had been activated to warn residents of dangerous air quality. Her asthmatic little one was being put on oxygen as a direct result. Eventually, her husband who works in Las Vegas had to the take the little boy out of town and put him in a day care center for the week near his job, while daddy worked. Families were being broken apart in attempts to stay out of the hospital.

My daughter was texting me during the summit, panicked that the adults closest to her, my husband and her teacher, who is asthmatic and one of the most intelligent and in-control women I know, couldn’t handle the air quality! I had to explain that she needed to trust in our health department, her father and her teacher. They would not allow her outside if the air quality were bad. The crowning text message from her during the summit was, “I feel like the sharks are circling…” At that moment in time, I thought she was being a tad dramatic and I felt she was not in danger. Little did I know, I would too have that same feeling once I returned home. We’ve lived with asthma in our household for 13 years and have seen it all…. or so I thought. When I had left town the air quality was Moderate but had deteriorated dramatically while I was away.

My daughter also was threatening to leave home (she is 10, so I wasn’t quite sure about her transportation plans) and move in with her allergist, Dr. Joshua Jacobs, in Benicia, California. He had just built a house on the water and there was a guest room–apparently with her name on it. She kept texting that she was packing her bags. She was very upset by the smoke and the possibilities of what it could do to her lungs.

Fortunately, her lungs stayed in great shape but the emotional impact of pending danger was more than she could handle.

The morning after I arrived back home I started wheezing, couldn’t see the sky and my eyes burned. This went on for days and days. I started using my rescue inhaler and cut down my errands to only essentials. If a task could wait, it did. Being surrounded by something so potent was emotionally challenging. Smoke, pollution and bad air quality have always been the enemy and now we were swimming in it.

Another friend felt oddly exhausted and visited her physician. She has a chronic medical condition and thought that was possibly the cause. After having blood tests completed, the physician summoned her to the office. She was suddenly anemic! The smoke was crowding out the oxygen she needed!

The consequences and financial damage for the Rim Fire reach far beyond fire lines. I can’t begin to comprehend how much was spent on emergency room visits, medications, missed days of school and work due to respiratory issues. I also wonder about the work productivity for those battling headaches.

In our family, we didn’t need a wake-up call about air quality, indoors and out. We are hoping to see an end soon. I’m hoping my daughter will not move out (although both Dr. Ruchi Gupta offered her a safe smoke free haven if she’ll travel to Chicago)!

I’ve widened my sphere of influence, and turned myself into a kind of Civil Air Quality Patrol for my neighbors. I keep reminding friends to change their HVAC filters and run those fabulous indoor air filters too. However, this disaster is a signal that whatever we do as individuals is not enough. All those who came to Nevada in part because of the clean desert air will now have to re-think. And we can’t forget that air quality is not a matter of local or even regional choice. California is burning and we are choking. Smoke doesn’t stop at the state line. We are all asthmatic now.

You've heard from a patient. Now you will hear from a doctor. Topical Steroid Withdrawal, … END_OF_DOCUMENT_TOKEN_TO_BE_REPLACED

By Paul Ehrlich, MD The title above is from an excellent article in The Atlantic by … END_OF_DOCUMENT_TOKEN_TO_BE_REPLACED

By Dr. Paul Ehrlich and Henry Ehrlich We were saddened to read that our co-author … END_OF_DOCUMENT_TOKEN_TO_BE_REPLACED