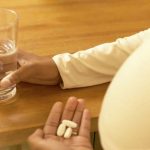 We want to thank the readers of asthmaallergieschildren.com for their thoughtful comments and questions about the article we posted recently on epigenetics and the prenatal origins of allergic disease. We would like to address some of the questions/comments because they bring up some extremely important points. One mother wondered whether she may have “caused” her child’s allergies by taking folate (aka folic acid) supplements during pregnancy. Another mother was curious if her first child was affected because she stopped treatment for allergic rhinitis during pregnancy. Finally some mothers commented that they have low folate status due to genetic disorders, and yet they have children with allergies.

The Importance of Folate
The American College of Obstetricians and Gynecologists recommends that all women of childbearing age consume 0.4 milligrams of folic acid per day. When recommendations such as these are developed, a large team of doctors examine the medical evidence to come up with best practice guidelines. The weight of medical evidence is based on the number of studies and their quality (how big the study was, how well controlled, whether it was in animals or humans, etc). The evidence that folate supplementation reduces the risk of neural tube defects is very strong, and the potential severity of a neural tube defect is high. Right now there is not enough evidence that folate has negative effects (such as promoting allergy) to shift the balance of risks vs. benefits towards a change in the recommendations.

The comments we received from mothers who have low folate levels due to genetic factors bring up an interesting quandary. If high folate during pregnancy is associated with allergies in children, then low folate levels should be protective, right? Surprisingly, the relationship between folate and allergy was brought to the forefront when a Danish group demonstrated an association between mutations in methylenetetrahydrofolate reductase (MTHFR), an enzyme important in processing folate, and allergy in those who carry these mutations (they did not look at their children) (1). They suggested that low folate levels may promote allergy. Two subsequent studies used birth cohorts to examine mother-child pairs and found no effect of MTHFR mutations on allergies in the mother or child (2, 3). Could this be considered a strike against the hypothesis that epigenetics are important in the prenatal origins of allergy? Perhaps. However, the relationship between vitamin levels and health are often complex. It is not uncommon for both low levels and high levels of a vitamin or mineral to be associated with negative health effects (iron and vitamin D provide such examples). We hope that future research in this area will refine the target levels of folate that provide the most health benefits.

A Mother’s Allergies and Those of Her Children
We also mentioned in our article that a Japanese study examined 400 mother-child pairs and found an association between maternal symptoms of allergic rhinitis in early pregnancy and allergic rhinitis in the children (4). However, there is not enough evidence to suggest that a lack of treatment of allergic rhinitis can “cause” allergies in children. Of course, any drugs taken during pregnancy should be discussed with your doctor in advance. A wonderful resource from the Hospital for Sick Children in Toronto, Canada is www.motherisk.org, where you and your doctor can find useful information about the most up-to-date research on the safety of drugs during pregnancy and breastfeeding.

No mother can “cause” allergies in her child, especially not by conscientiously following the recommendations of her doctor. In truth, we do not know of any one thing, or combination of things, that can cause allergies 100% of the time. Many of the factors that the media has pointed to as “causes” of allergy, are actually “associations” found using epidemiologic studies. Epidemiologic techniques are wonderful tools for looking at populations, but the results are population-specific and cannot show cause and effect.

A Roll of the Dice
What they can tell us is that on average a first child may be at higher risk for allergy than a third child, a child who needs antibiotics more often may be at higher risk than a healthy child, and a child who lives in a western country eating a western diet, in a relatively clean home, may be at higher risk than a child in a developing country. Epidemiologic studies tell us that factors such as these may raise the overall chances, but when it comes down to it for any particular child, it is still a roll of the dice. At a population level we can identify factors that kids who rolled “snake eyes” for allergy had in common, but often findings that are mathematically significant only demonstrate an increased chance of a few percentage points. This means that there are plenty of kids whose mothers took folate, who received antibiotics and grew up in a western country and who did not develop allergy. Unfortunately, because no single cause or specific combination of causes, of allergies has been identified yet, no one can say why your child had to be one of the unlucky ones.

So, to protect our children, should we all refuse folate and antibiotics and move to a developing country? The answer is a resounding No. That would put our children at increased risk of neural tube defects and infectious diseases, and still would not guarantee an escape from allergy. What the new field of epigenetics may be able to offer is a way to explain how gene-environment interactions lead to allergic disease, and possibly a way to identify children who would benefit the most from early interventions. Such early interventions that are currently being studied are the early introduction of allergenic foods to children who are at risk, and the administration of immunotherapy before the development of allergy. Unfortunately none of these ideas can be put into practice until they are shown to be safe and effective. Research takes time, but new breakthroughs are on the horizon.

This was the first of several chats I had with Dr. Peter K. Smith, whose "False Alarm … END_OF_DOCUMENT_TOKEN_TO_BE_REPLACED

This was the first of several chats I had with Dr. Peter K. Smith, whose "False Alarm … END_OF_DOCUMENT_TOKEN_TO_BE_REPLACED