In our book, I wrote this:

SCIENCE OR NO SCIENCE?
For over twenty years I have been involved in fending off disinformation about food allergy. For the record, food allergy is an immune response to certain foods… It’s hard enough to get good medical science into common use… Whenever this happens, I think of the words of that eminent Italian-American philosopher Yogi Berra: “It’s déjà vu all over again.” 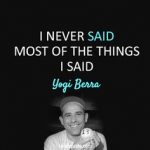 A new article published in the Journal of Pediatrics brings this past-life experience right back into the present. Drs. David Fleischer and Wesley Burks (one of my heroes) write about a retrospective chart review of 797 patients at the Southwestern Medical Center by three doctors, published as “Food Allergy Panel Testing Often Results in Misdiagnosis of Food Allergy” in the same issue. Fleisher and Burks write:

Of these, 284 (35%) had serum IgE testing performed to foods; 10 patients were excluded due to eosinophilic esophagitis, leaving 274 for further analysis. Only 90 of the 274 (32.8%) had a clinical history warranting evaluation for IgE-mediated food allergy. In the 184 patients without a history suggestive of food allergy, the most common reasons for the referring provider to order these tests were allergic rhinitis (99 patients), mild atopic dermatitis (42 patients), and idiopathic urticaria (19 patients); 180 patients (98%) were found to not have food allergy, whereas in 4 patients, an unknown food allergen was identified, yielding a positive predictive value of serum IgE testing of only 2.2% in this population.

I would like to know why the other 513 patients ended up at the Center. Did all of them have clinical histories of reaction? Were they self-diagnosed? But that’s just my morbid curiosity. The original article was just concerned with those who had had the full IgE panel and how little it helped.

This study gives me that feeling of déjà vu because in 1996, my colleague Daryl Altman and I published a survey that showed 15-20% of the population perceived they had food allergies while most experts put that number below 5%. There is clearly a difference between perception and reality. I doubt whether that discrepancy is any narrower today.

The misdiagnosis described in the new article had real-world consequences as summed up by Fleischer and Burks:

As a result of the serum IgE testing and recommendations by the referring provider, 126 of the 274 patients (45.9%) altered their diets; of these, only 54 (42.8%) had a clinical history warranting evaluation for IgE-mediated food allergy. The remaining 72 patients were determined to have no IgE-mediated food allergy after a careful clinical history, skin testing when necessary, or, in 1 patient, after a negative oral food challenge (OFC). The 54 patients who altered their diets were avoiding an average of 4.8 foods, the most common being milk, egg, peanut, and tree nuts. An average of 2 foods, however, were able to be reintroduced in these patients, and out of the 126 patients who altered their diets because of testing and provider recommendations, 112 (88.9%) were able to reintroduce at least 1 food.

As medical articles go, the authors are pretty tough on the misuse of broad panels of serum IgE for diagnosis. We have written about these tests extensively on this website. Like us, the authors stress that a clinical history and physical examination are the bedrock of any food allergy diagnosis.

The big takeaway for me is that they recommend severely restricting the scope of IgE panels to just the big 8 allergens–milk, egg, peanut, tree nuts, soy, wheat, fish, and shellfish. “Currently, most panels include unnecessary and extremely unlikely food allergens, including corn, beef, pork, and chocolate. In this study, no patient found to have positive tests to corn or chocolate was found to be truly allergic, and even with foods that are more common food allergens, 75% were able to reintroduce soy and wheat. Besides better education of the providers ordering these panels, the companies that manufacture these IgE tests need to remove the unlikely allergens from them.” They say that this idea of eliminating the catch-all IgE panels is now under discussion.

Is this the last word on this subject? No. As the authors point out, this is only one center, and only 797 patients. But it’s obviously not the first word on it either, and yet somehow we are stuck in this feedback loop of over-diagnosis, misleading information, and real-world consequences for patients and families, so I suspect it will continue to happen. Our favorite statistic is that it takes an average of 17 years for a clinical breakthrough to make it into half the medical practices in the country, but I don’t know where we stand on that timetable on diagnosis of food allergies; I suspect we’re well behind. The consequences of misdiagnosis of food allergies are onerous for the families that feel compelled to avoid foods they don’t need to avoid, carry expensive epinephrine, and ask for special concessions from schools. It is also unfair to the families whose children do require these considerations.

This was the first of several chats I had with Dr. Peter K. Smith, whose "False Alarm … END_OF_DOCUMENT_TOKEN_TO_BE_REPLACED

This was the first of several chats I had with Dr. Peter K. Smith, whose "False Alarm … END_OF_DOCUMENT_TOKEN_TO_BE_REPLACED