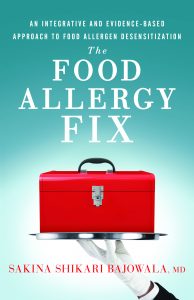 This is a long-overdue book, not in the sense that library books are kept too long but because it brings us up to date on the still-unapproved, yet widely available, treatment called oral immunotherapy (OIT) for food allergies. We have been following the progress of OIT on this website for years since before we published a piece by Dr. Hugh Sampson with the subtitle “Not Ready for Prime Time.” It attracted so many hits that it crashed the site, which remained out of commission for a nervous weekend while we tried to reach our developer in Sri Lanka. In the intervening years, we have seen such developments as AR101 (a prescription oral immunotherapy being fast-tracked to market), and other immunotherapies such as sub-lingual (SLIT), epicutaneous (EPIT), and even toothpaste (oral mucosal immunotherapy, or OMIT), as we reported recently. Many patients will no longer be restricted to eternal vigilance as a food allergy strategy, although they will have to continue to carry their epinephrine.

In the meantime what I used to call the OIT underground has continued to percolate and proliferate. Dr. Bajowala makes a strong case that it is ready for prime time. But not on network TV! This is premium cable, and with the publication of this book, Sakina becomes the HBO of private practice OIT by taking us inside the history and methodology of her work. She describes the processes both of sensitization and desensitization, and creates a detailed blueprint of how an OIT practice should function, highly individualized and flexible, right down to strategies for educating children on their responsibilities. She believes that prescription immunotherapy (call it basic cable) will leave many patients behind, although it will be offered by more mainstream allergists.

Dr. Ehrlich pointed out in his column a few years ago, Dr. Bajowala’s brand of OIT is not for every allergist, including himself: “Even if I overcame my reservations about the state of the research and bought into one of the protocols being used in private practice, I believe this will eventually involve a sub-specialty of allergy and immunology, as indeed, is the de facto case already. Deliberate daily exposure to a food allergen requires round-the-clock availability that I am not prepared to give.”

Sakina herself might have chosen the standard route, but for the fact that her own children turned out to be food allergic and she wasn’t going to take it lying down. She studied the scientific literature, but as a mother she wasn’t content to wait and began poking around the protocols being pioneered at the time. Despite the emotional underpinnings of this journey, she is never anything other than information-driven and analytical about the brand of medicine she offers her patients, starting with the careful choice of title The Food Allergy Fix. This is a fix, not a cure, and some patients may not be fixable. Moreover, it does nothing for co-morbid conditions like asthma and eczema, which often constitute greater threats to quality of life, and in the case of asthma to life itself, than food allergies. 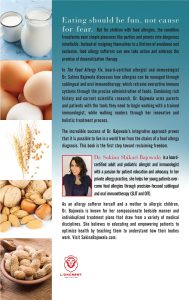 One thing that really captured me about Dr. Bajowala’s approach was her emphasis on the importance of digestion. Food allergies are a condition of the digestive system as well as the immune system. In the early days of private OIT I heard about even very young patients being given antacids and proton pump inhibitors to keep their gorge from rising, and give the allergen time to engage their immune systems. To caregivers and doctors, the prospect of eventual tolerance was worth the risk of short-term discomfort and, as it turns out, long-term damage. The other doctor I know for whom digestion is given equal weight is my co-author Dr. Xiu-Min Li whose practice, centering on traditional Chinese medicine (TCM), embraces a category of patients who have suffered chronic gastric distress from OIT. She and Dr. Bajowala collaborate on some patients.

Dr. Bajowala’s approach is based on the other great Asian medical tradition called Ayurveda, which to my dim Western eyes places even more emphasis on digestion than TCM. The one lecture I heard about it by a prominent allergist contained more references to poop in 20 minutes than you would hear from a typical eight-year old boy. The point being for purposes of Sakina’s book is that it provides an accessible and practical roadmap for the forgotten side of treating food allergies that should be required reading for OIT practitioners current and aspiring.

OIT is not for all allergists and not for all patients. Neither group should feel pressured to undertake it without full understanding of commitments and risks involved. A recent retrospective study of 270 patients aged 4-18 showed that 79% were desensitized to peanut, although there were epinephrine-treated reactions in 63 patients and isolated gastrointestinal symptoms in 101. Seventy-nine percent efficacy is not too shabby; many approved drugs have lower efficacy rates. But those results also leave some questions unanswered. That study was just for peanuts, the best-studied allergen; others, notably milk, can be trickier, and remain to be similarly studied. In a real-world setting, will patients be properly screened to see if they are allergic or will non-allergic patients be counted as successes? And with all OIT the prospect of maintenance dosing poses an unending dilemma. Medication fatigue is a challenge with all chronic disease management, although it can be more bearable if taken in the form of pizza and ice cream, as Dr. Bajowala points out.

The food allergy epidemic will continue to prod doctors and patients in the direction of action. This book, written with warmth, authority, and good humor, will help both figure out where they stand. So, well done, Sakina.

This was the first of several chats I had with Dr. Peter K. Smith, whose "False Alarm … END_OF_DOCUMENT_TOKEN_TO_BE_REPLACED

This was the first of several chats I had with Dr. Peter K. Smith, whose "False Alarm … END_OF_DOCUMENT_TOKEN_TO_BE_REPLACED