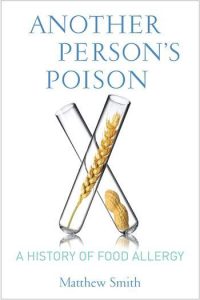 When I was writing my last book, Dr. Renata Engler said, among many wise things, that allergists had “lost connection with patient stories. Patients who don’t fit are marginalized.” And “Fifty percent of evidence-based medicine is significantly revised and/or reversed in five years. Most money goes into confirming what we already know instead of focusing on the gaps where we could add information.”

Matthew Smith’s book takes us to back to the creation of modern allergy medicine and shows us that Dr. Engler’s themes were present throughout. Having previously written about the history of psychology/psychiatry, Smith was well situated to take on a specialty that splintered early and has been divided ever since. Following this template, Smith points out that the field of allergic medicine, and particularly food allergy, began to divide almost as soon as Clemens von Pirquet coined the term allergy in 1906. The author labels the three principal branches as “orthodox allergists”, “food allergists”, and “clinical ecologists”. If this were a biography of a religion, these would be called sects, each with its own version of the truth and its own politics.

According to Smith orthodox allergists are grounded in science and treatment based on what we know about the immune system; they have always controlled the research agenda and still do. Symptoms that fell outside narrow bounds were frequently labeled psychosomatic (and still are). They tried to adapt the tools of environmental allergy, skin tests and desensitization, to food, without success. Food allergists, as Smith uses the term, were devoted to the study of patient complaints, whether immune responses, digestive problems, migraine headaches, or changes in behavior. The pioneers he discusses often have food-related problems of their own, which motivates their sympathy to patient reports. Their diagnostic methods over the decades included Pentagon-strength elimination diets treated by avoidance, but no therapy. Clinical ecologists look at food allergies as a byproduct of a general assault on our bodies by our environment through modern chemistry. The heirs of the latter two traditions may be board certified in allergy and immunology and various other specialties, but they may also be branded kooks and profiteers.

The struggle among these various camps for respectability is well handled. I particularly enjoyed the account of how the discovery of IgE raised hopes among orthodox allergists that it would elevate allergy to a more elite level among specialties, only to find that as a measure of disease and a target of therapy it was a lot more enigmatic than markers for other diseases. It can’t be used like a thermometer since people with elevated numbers for specific IgE may tolerate their allergens. As we now know, it is just one more piece of the puzzle for diagnosis, along with skin prick tests, which are discussed extensively in the book, and component tests, which are not. As a yardstick for achieving tolerance, it is unreliable.

Another Person’s Poison is a medical history, published by a university press. Definitions of terms and categories abound. If it were a different kind of book, say a cry of the heart by a despairing mother struggling to help her child, it might be called “Highway to Hell” the signature song of AC/DC; the book opens with an account of banning peanuts at a concert by the band in Canada. But it is not fueled by outrage, although the author clearly cares about his subject. It relies on the written record, something that separates academic history from journalism. Dr. Naomi Oreskes of Harvard, a science historian who concentrates on climate, says, “One of the things that should always be asked about scientific evidence is, how old is it? It’s like wine. If the science about climate change were only a few years old, I’d be a skeptic, too.”

Both history and journalism have their place. As history the book is a useful resource for those who want to find out how we got where we are, but it will not in itself help fight the battles for research on treatment, causation, better labeling, or even universal stocking of epinephrine. Nor will it provide much reassurance about the future of treatment.

The lineage of this book is distinguished. It reads like the third volume of a trilogy with Mark Jackson’s Allergy: A History of a Modern Malady and Asthma: The Biography and that’s a good thing. Jackson was Smith’s advisor in graduate school at the University of Exeter (UK). I prize the earlier books because they give me instant access to information that makes me sound better read than I am. Jackson’s books were disheartening in that they showed how and why the field of allergic medicine was played largely between the forty-yard lines for a century. Medicine was remedial, not curative, and Big Pharma largely pulled the strings. Depending on what you hear in a given week, we may be due for another miserable century with food allergies.

One element that will make Another Person’s Poison useful in cocktail party arguments and family gatherings is that food allergies are not new. How many times have we heard, “when I was a kid no one was allergic”? It convincingly shows us that foods have disagreed with some people for thousands of years. Lucretius (98-55 BCE) wrote, “That which is food to one to others proves/A biting poisonous curse.” Hippocrates (460-370 BCE) makes a cameo appearance, as do Galen (130-210), and the “quasi-mythical Chinese emperor Shen Nung 5000 years ago, who is said to have urged pregnant women to avoid fish, shrimp, chicken, and horse meat in order to prevent skin ulcerations.” This list is notable because it contains two items from our contemporary “big 8” list. Other citations going way back help fill out the roster to include dairy and eggs. Clearly, there is something about those foods, and there always was.

Another Person’s Poison does point to some hopeful events as patient centrism and environmental worries have bled into orthodox allergy. For one, Smith credits the creation of a movement by parents, including Anne Munoz-Furlong, which in its various incarnations has now become FARE. I think that this movement has succeeded in making orthodox allergists more inclined to listen to patients, although the job is far from finished. He also mentions the diagnosis of Food Protein-Induced Enterocolitis Syndrome (FPIES), a non-IgE-mediated food allergy, as an example of how orthodox food allergists were starting to come to grips with diseases that met von Pirquet’s original definition of any form of biologic reactivity. Smith also makes a call for greater research into causation as possibly leading to better treatment.

I do wonder why he omitted oral immunotherapy (OIT) for food allergies except for a couple of passing references. Whether we agree about its being ready for prime time or not, OIT has absorbed a huge proportion of research dollars aimed at treatment over the past decade, and is worthy of analysis according to a number of themes that run throughout the book. I wonder, too, about why FPIES is the only non-IgE-mediated allergy mentioned; eosinophilic esophagitis and mast cell activation syndrome have been recognized for years, but neither eospinophils, which are white blood cells that congregate in inflamed mucosa, nor mast cells, which are the primary arsenal of allergies of all kinds, make an appearance. The discussion of causation is pretty thin, although knowing what I do about the timeline of publishing a major book, it’s understandable that the author missed out on studies of the microbiome, epigenetics, and peanut sensitization via the skin, which have burgeoned in the two years– not a lot of time in the publishing business. I expect that if Smith chooses to revisit this subject in a few years, he will have plenty to say. I also wonder at what point the work of the big names in food allergy will qualify for inclusion. Dr. Hugh Sampson is mentioned just once for the support he gave to the nascent food allergy advocacy movement. Wesley Burks, Robert Wood, Kari Nadeau, Xiu-Min Li, Gideon Lack, Helen Brough, George du Toit, and many others don’t appear at all even though they have been publishing significant work for decades.

Regardless of its limitations as light summer reading, for those who care, Another Man’s Poison is important and compelling. I look forward to citing its wealth of ideas and factoids in months to come, properly attributed of course. And I look forward to sitting across a table from author Matthew Smith this fall in Denver at the food allergy blogger conference, shooting the breeze and drinking beer, or whatever they use in Colorado these days to fuel conversation.

This was the first of several chats I had with Dr. Peter K. Smith, whose "False Alarm … END_OF_DOCUMENT_TOKEN_TO_BE_REPLACED

This was the first of several chats I had with Dr. Peter K. Smith, whose "False Alarm … END_OF_DOCUMENT_TOKEN_TO_BE_REPLACED