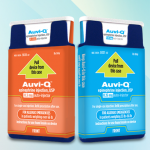 We should have known it was coming. Last year EpiPen® and its parent company Mylan began to raise their profile by advertising on TV—not always to good effect as when they showed a mom marching off to a party with her food-allergic child, unconcerned about the food because they had an EpiPen®. With a market share in auto-injectors that would have had Teddy Roosevelt (himself an asthma sufferer) charging up San Juan Hill, Mylan has been making a big push to make EpiPens more widely available in schools. Good for them—a company with the lion’s share of the market ought to lead.

But Mylan also had a good business reason for the largesse.  They surely knew competition was on the horizon, and now it’s here. A new product called Auvi-Q™, licensed in the US by Sanofi, has received FDA approval for sale. In our relentless search for life-saving allergy technology, we were intrigued by a couple of things. First, Auvi-Q™ is shaped more like a smartphone than a double-barreled Sharpie—indeed one mother we are in touch with was worried that it would get lost in her purse if it felt like one more writing implement.

Second, and more important, it actually talks you through the injection process. This virtual bedside manner is important because we know that many parents and patients are never instructed in proper injector use after having it prescribed, which can turn a high-stress event into a disaster. Anyone who learned their epi technique by watching the movie “Horrible Bosses” (in which Kevin Spacey is injected in the middle of his sternum) would be rapidly reeducated by Auvi-Q™.  (Let me also point out that the movie didn’t feature an EpiPen®.)

We caught up with a Sanofi spokesperson who told us that it was the brainchild of twin brothers who suffer from life-threatening allergies, Eric and Evan Edwards, and co-founders of Intelliject, Inc.  They developed Auvi-Q™  with a team of world-class engineers and scientists, using a development process called Human Factors, which incorporates psychological elements as well as engineering to make the final product user friendly. Real allergy sufferers took part in focus groups and testing.

We also asked about the uptake of the injectable epinephrine, since EpiPen® sets the current standard for efficiency. The spokesperson directed me to the following paragraph on their website: “A bioequivalence clinical study was conducted using Auvi-Q (epinephrine injection, USP) and EpiPen®. Both auto-injectors delivered 0.3mg of epinephrine. Injections with epinephrine using Auvi-Q™ were well-tolerated and resulted in epinephrine plasma concentration levels that were found to be bioequivalent to EpiPen®.” As they say in court, “asked and answered”.

So there, EpiPen®–let the games begin.

You can find a demo of Auvi-Q™ here.

You've heard from a patient. Now you will hear from a doctor. Topical Steroid Withdrawal, … END_OF_DOCUMENT_TOKEN_TO_BE_REPLACED

By Paul Ehrlich, MD The title above is from an excellent article in The Atlantic by … END_OF_DOCUMENT_TOKEN_TO_BE_REPLACED

By Dr. Paul Ehrlich and Henry Ehrlich We were saddened to read that our co-author … END_OF_DOCUMENT_TOKEN_TO_BE_REPLACED