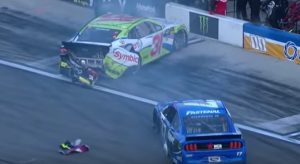 Out of all the places in all the world, the last place I thought I’d see a promotion for an asthma medicine, the side of a 200 MPH racing car was probably it. But there it was. A post on social media showing a massive pile up at the Daytona 500 drew my morbid curiosity and after two minutes of a greatest crashes compilation a spinning car appeared, losing body panels like a sheep dog shedding its winter coat. The ones that remained had the name Symbicort in jillion-point type. They are a sponsor of a Chevrolet Camaro ZL1 fielded by Richard Childress Racing in the 2018 Monster Energy NASCAR Cup Series.

Symbicort, like its competitor Advair, combines an inhaled corticosteroid with a B2 agonist to relax constricted airways. (We have discussed these drugs many times, including here.)

Isn’t this odd? I can’t think of a spectator sport less suitable for asthmatics than NASCAR, a spectacle of burning tires and fiery crashes, filling the air with rubber smoke and dangerous particulates from exhaust and flaming cars. Maybe, as a friend pointed out, they are trying to create future customers.

I called the Astra-Zeneca PR office, hoping to find answers to several questions, such as how did they arrive at this sponsorship? Who are they trying to reach? How do they feel about the spectators inhaling all that junk? Don’t they know that living close to a highway or even a building with an oil-fired furnace can increase the incidence of pediatric asthma geometrically? The amount of fuel burned in a race weekend can heat a neighborhood for a year.

I’m still waiting for Astra-Zeneca to call me back.

I also looked at NASCAR’s website. It turns out they have a robust green and sustainability program. Who knew? The only NASCAR fan I know about is radio personality Ronnie the Limo Driver Mundt, and in all the times I’ve heard him talk about NASCAR, he has never expressed any concern for air quality. According to NASCAR’s website:

They recycle all the tires used by their competitors as well.

Admirable. Looking at the NASCAR map, the tracks don’t appear to be in parts of the country associated politically with concern about the greenhouse effect. Maybe fans can bring all that green goodwill to bear on their elected officials to do more.

Map published by Seattle Times; crash from a YouTube video

You've heard from a patient. Now you will hear from a doctor. Topical Steroid Withdrawal, … END_OF_DOCUMENT_TOKEN_TO_BE_REPLACED

By Paul Ehrlich, MD The title above is from an excellent article in The Atlantic by … END_OF_DOCUMENT_TOKEN_TO_BE_REPLACED

By Dr. Paul Ehrlich and Henry Ehrlich We were saddened to read that our co-author … END_OF_DOCUMENT_TOKEN_TO_BE_REPLACED