By Mark Jackson (From Asthma: The Biography Oxford University Press, 2009) 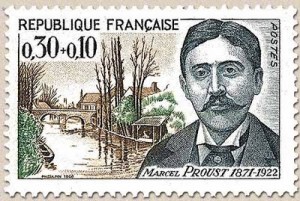 “As regular letters to his family and friends make clear, during the 1900s and 1910s Marcel Proust struggled to control his asthma and hay fever effectively, particularly following the death of his mother in 1905. The treatments available to Proust and his contemporaries included not only symptomatic relief with inhaled anti-spasmodics and various stimulants and relaxants but also the careful avoidance of triggers achieved either by manipulating the domestic environment or by retreating to the mountains or coastal areas where the air was supposedly free from pollen and dust. During the late nineteenth century, the popularity of ‘climate therapy’ for hay fever and asthma had profitably established certain towns and regions as fashionable health resorts.

“On the advice of his doctors, for example, Proust periodically travelled to Thonon or Evian-les-Bains on the southern shores of Lake Geneva to relieve his asthma and in December 1905 spent six weeks in a sanatorium on the outskirts of Paris. In 1932, Arnold Schoenberg moved from Berlin to Barcelona partly to improve his asthma; two years later, after emigrating to North America, he again relocated from Boston to Los Angeles in search of cleaner, warmer air. Schoenberg was not alone; for several decades around the turn of the nineteenth into the twentieth century, many wealthy American sufferers from hay fever and asthma flocked to luxurious resorts in the White Mountains or Adirondacks to relieve their respiratory distress.”

Kelly Barta, who has previously appeared on this website, is a survivor of topical steroid … END_OF_DOCUMENT_TOKEN_TO_BE_REPLACED

By Paul Ehrlich, MD The title above is from an excellent article in The Atlantic by … END_OF_DOCUMENT_TOKEN_TO_BE_REPLACED

By Dr. Paul Ehrlich and Henry Ehrlich We were saddened to read that our co-author … END_OF_DOCUMENT_TOKEN_TO_BE_REPLACED