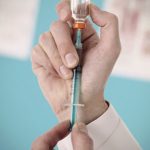 We recently heard about a patient who had to be treated with epinephrine twice in recent months after allergy shots, the second time after a reduced dose. People wonder, is this on the increase? Has something about shots changed in the nearly hundred years of their use that has made them more dangerous? This individual is not the only one curious about this topic. It happens that the AAAAI is surveying allergists, and the questionnaire is sitting on my desk. It could be that the incidence seems to be on the rise because patients are communicating about it, which they never could do in the many decades before social media. Perhaps the AAAAI can sort that out. I commend them for paying attention.

I can’t speak for other allergists, but I haven’t seen any trend for anaphylaxis, although there have been many changes in how shots are formulated and administered. As we wrote in our book, once upon a time dust for dust mite serum was collected from church ladies who were paid cash for saving the stuff they swept up during the course of the week. Cat dander was collected from dumpsters behind Chinese restaurants, which were magnets for feral cats. Now those substances are generated by more clinical means. The antigens are much more refined.

The biggest shift recently is that instead of supplying bottles with 20,000 protein nitrogen units (PNU) bottles of antigen and leaving it to the individual practice to combine it a few PNUs at a time with saline to make custom dilutions and combinations for individual patients, suppliers prefer to pre-mix a prescription and deliver it shot ready to the administering doctor. This has some advantages to doctors, allowing them to save on the cost of keeping fresh serum and antigens in stock, and staff-time to prepare the injections, although it also requires additional refrigeration as all the extra bottles must be stored—a problem for urban practices like mine, where space is at a premium. For patients, there is no waiting time while the shots are prepared. Business managers also like it because insurance companies pay for the shots up front, and if patients never show up for their injections, it is just disposed of with no cash loss.

There is also a safety feature. It spares the practitioner the possibility of faulty arithmetic in mixing the stuff. The difference between 1000 PNUs of antigen in a 1.0 cc of saline and 10,000 units PNUs can be the difference between life and death. Human error is a real issue. One of our patients who received his injections at the hospital where he worked. He had graduated from the highest dose at a low concentration to the lowest dose at a higher concentration and the instructions were marked clearly, but the nurse didn’t read them and gave an effective dose 10 times too large.

I don’t particularly like the new system of packaged serum for patients with multiple allergens because it doesn’t afford flexibility in accounting for certain variables. Let’s say an injection calls for 1000 protein nitrogen units PNUs of pollen as one of several allergens, including grasses, cats, and dust mites, and say, as happens more frequently these days, the pollen season is exceptionally long and heavy. Under those circumstances, I might want to cut back to 800 PNUs, but because the higher dose is set, we’re locked in.

Allergy shots injections remain one of the best tools we have for relieving misery and if certain research is to be believed, patients prefer them to drops given under the tongue, as Larry has written. As to whether they are resulting in more anaphylaxis than they used to be, there’s a reason we ask you to sit quietly in the waiting room after your shot.

This was the first of several chats I had with Dr. Peter K. Smith, whose "False Alarm … END_OF_DOCUMENT_TOKEN_TO_BE_REPLACED

This was the first of several chats I had with Dr. Peter K. Smith, whose "False Alarm … END_OF_DOCUMENT_TOKEN_TO_BE_REPLACED