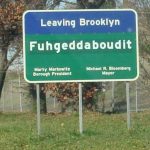 I have spent thirty years teaching and practicing allergy in Brooklyn and the past 10 in the Bronx. Abstract 341 presented at the AAAAI meeting “Effect of Duration of Residence in Brooklyn on IGE Responses of Immigrants” by Dr. Edward Kleiman M.D. caught my interest. Dr. Kleiman and his group are to be complimented on the systematic way they measured IGE and analyze the data. We did no such study but were able to observe the differences in asthma frequency and severity in the two boroughs.

With a population close to 3 million, a history of independence as a separate city, an easy commute to Manhattan and a recent explosion of redevelopment, Brooklyn is clearly the premier outer borough of New York City. As the economy has progressed over the past 20 years, the frequency and severity of asthma has decreased. On average it is still higher than the rest of the country and pockets of asthma exist in the poorer areas. The neighborhoods of Brooklyn contain a greater mixture of different ethnic groups than the Bronx. Asians, Africans, Hispanics, Orthodox Jews live side-by-side in most neighborhoods. The difference in response of the various ethnic groups in poor areas to developing asthma is not clear.

The Bronx, with about a third of the population of Brooklyn, is recovering economically at a slower place. The population is primarily Hispanic. The frequency and severity of asthma is currently much greater in Brooklyn. There seem to be ethnic influences on the susceptibility to asthma. Hispanics from Mexico and Central America seem to be much more resistant to developing Asthma; while the Hispanics from the Caribbean islands seem to have a greater susceptibility.

You've heard from a patient. Now you will hear from a doctor. Topical Steroid Withdrawal, … END_OF_DOCUMENT_TOKEN_TO_BE_REPLACED

By Paul Ehrlich, MD The title above is from an excellent article in The Atlantic by … END_OF_DOCUMENT_TOKEN_TO_BE_REPLACED

By Dr. Paul Ehrlich and Henry Ehrlich We were saddened to read that our co-author … END_OF_DOCUMENT_TOKEN_TO_BE_REPLACED