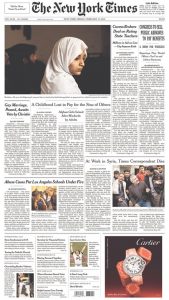 I’m sure I am not alone in confessing that my first thought after reading about NY Times reporter Anthony Shadid’s death from asthma in Syria was, “Of all the things to die from in Syria.” Decades of reporting from the cauldron of Middle East turmoil, including detention in Libya during the recent fighting, and this is what it took?

I was particularly struck by these sentences in a news account.

Shadid’s father, Buddy Shadid, told The Associated Press on Thursday his son had asthma all his life and had medication with him. “(But) he was walking to the border because it was too dangerous to ride in the car,” the father said. “He was walking behind some horses – he’s more allergic to those than anything else – and he had an asthma attack.”

But asthma is not just one thing. Primary physicians can prescribe albuterol and ICS the same as the next guy. However, patients should also be seen by allergists if only to rule out allergies but certainly to treat allergies if they have them. If there are allergies involved additional treatments and precautions must be taken. Most of us think of food allergens as having the potential to trigger anaphylaxis and kill in four minutes of oxygen deprivation, which usually involves co-morbid asthma. But any allergen can have that effect for an individual patient, and apparently horse allergen was such a problem for Mr. Shadid. He knew it was a problem but thought he was safer on foot than in a motor vehicle. Horse allergen can be extraordinarily potent because so much of it is produced. Try to ignore the smell of a horse when you are around one; that smell is full of allergens penetrating the recesses of your lungs. I once tried to treat an actor who was supposed to appear in a Western, to no avail. He had to bow out.

Times readers will miss Anthony Shadid, and the world will miss his crucial reporting from a dangerous part of the globe, but his death reminds us that uncontrolled asthma and untreated allergies are equal opportunity killers.

Kelly Barta, who has previously appeared on this website, is a survivor of topical steroid … END_OF_DOCUMENT_TOKEN_TO_BE_REPLACED

By Paul Ehrlich, MD The title above is from an excellent article in The Atlantic by … END_OF_DOCUMENT_TOKEN_TO_BE_REPLACED

By Dr. Paul Ehrlich and Henry Ehrlich We were saddened to read that our co-author … END_OF_DOCUMENT_TOKEN_TO_BE_REPLACED